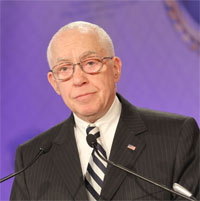 By Michael -- Mukasey FoxNews.com - The Jasmine revolution in Tunisia and the ongoing tumult in Egypt and Yemen present a dilemma for United States foreign policy. The administration is concerned about not being responsive to the protesters in Cairo, but it is also alarmed over the possibility that change in the status quo in Egypt would empower Islamic fundamentalists in the most populous Muslim nation in the Middle East. Either way, the risks are enormous.

Iran plainly is intent on taking advantage of these events. The prospect of Tehran, which is in a mad dash toward developing nuclear weapons, shaping events in Egypt and Yemen would present a nightmare scenario for the United States and anyone concerned with preserving freedom and safety.

Just this past week, during Tehran Friday prayers, Supreme Leader Ali Khamenei, speaking not in Farsi but in Arabic to make certain he reached and impressed observers and actors in Cairo, praised the “explosion of sacred anger” and warned against any US “interference” in Egypt. Attacking President Hosni Mubarak as a “servant” of Israel and one guilty of “great betrayal” of Egyptians, Khamenei said the events in Tunisia and Egypt were the natural extension of the 1979 “Islamic revolution” in Iran.

“The enemy is using its security forces against you, in order to put fear and intimidation in your hearts, and to create chaos,” he said, adding, “Do not fear them, you are stronger than these people who have been paid for.” Khamenei seems to have been unembarrassed that it was he who ordered the crackdown on the 2009 pro-democracy movement, when millions of Iranians took to the streets and hundreds if not thousands lost their lives, demanding the ouster of Khamenei and his regime.

The Obama administration has been running hard, even if not always in a straight line, to make up for lagging behind when things began to unravel in Egypt, but it missed a great opportunity when Iranians rose up two years ago by resolutely taking the passive posture of a spectator – “the world is watching” –no to the undoubted delight of the Mullahs.

Ironically, the recent wave of executions in Iran shows a regime in panic because of growing political dissent and worsening economic situation.

In these circumstances, it would be both right and useful for administration to help empower the Iranian OPPOSITION. An Iranian regime preoccupied with its own population would cause far less harm thousands of miles away.

Among the more significant and less noted decisions open to Secretary of State Hillary Clinton that can actually affect the outcome of events is whether to remove the Iranian resistance organization Mujahedeen e Khalq (MEK) from the State Department’s list of Foreign Terrorist Organizations.

The organization, which advocates the overthrow of the Mullahs and their replacement with an Iranian government that is secular, democratic and nuclear-free, was first placed on the list in the 1990’s, during the Clinton administration, when it was felt that so designating MEK would enhance the possibility of engagement with the Mullahs. At that time, the latest allegation against MEK was that it was involved in violence against Americans in the 1970’s. Fast forward to the second Bush administration, when MEK was kept on the list out of fear that removal would irritate Iran into supplying IED’s and other weapons to forces inside Iraq fighting coalition troops.

We feasted once again on the fruits of engagement in late January when the vaunted P5 plus one talks in Istanbul, undertaken to charm the Iranians out of acquiring nuclear weapons, collapsed after two days.

Also, the Iranians for years have been providing advanced IED’s that kill our troops even with MEK on the list.

Moreover, our designation of MEK as a terrorist organization provides the Mullahs with cover to execute its adherents, and then claim disingenuously that they are executing terrorists. In January, Iran executed Jafar Kazemi, 47, and Mohammed Ali Haj Aghaii, 62, for offenses that included videotaping demonstrations in the wake of the corrupt election in 2009, and visiting their children who live in a compound – actually a city -- called Ashraf, of about 3,400 MEK adherents in Iraq near the Iranian border. These two are only the latest of thousands of victims.

Ashraf has been a bone in Iran’s throat for years. In 2003, when coalition forces led by the United States invaded Iraq, the residents of Ashraf surrendered to American forces the weapons they had used to defend themselves in return for a guarantee from the deputy commander of multi-national forces in Iraq that they would be treated as protected persons under the Fourth Geneva Convention. From 2003 to 2009 that pledge was scrupulously observed.

However, since then, the Maliki government’s record with respect to Ashraf has been squalid. It has either actively cooperated with Iran’s Quds force working out of Iran’s embassy in Baghdad, or turned a blind eye while Quds operatives physically attacked the residents of Ashraf and harassed them with 180 loudspeakers placed just outside the compound’s fence.

MEK itself is acknowledged by U.S. intelligence officials to have provided valuable information about Iran’s nuclear weapons program, including the first disclosure of the facilities at Natanz and Arak. The former government officials calling for an end to the terrorist designation and for protection of Ashraf, include former CIA Director James Woolsey, former FBI Director Louis Freeh, former U.N. Ambassador John Bolton, former Energy Secretary and U.N. Ambassador Bill Richardson, former Commander of the U.S. Central Command General Anthony Zinni, and former State Department counter-terrorism coordinator Dell Dailey. One of the many notable features of that list is that the government portfolio of everyone on it included or consisted entirely of protecting this country’s national security.

Here, the United States lags behind both the European Union and the United Kingdom, which have undone the terrorist designation of MEK.

The organization sued to demand that it be removed from the State Department list. Last July, the Court of Appeals for the District of Columbia Circuit sent the designation back to the Secretary of State for reconsideration.

Even the most cynical real politician would conclude that the time has come to remove MEK from the State Department’s list, terminate Iran’s license to persecute and execute MEK supporters, and permit MEK to generate support here and abroad for regime change -- the one outcome in Iran that is consistent with both our foreign policy goals and our ideals.

Michael Mukasey was Attorney General of the United States from 2007 to 2009, and served as a U.S. District Judge for the Southern District of New York from 1988 to 2006. He is now a partner in the New York office of Debevoise & Plimpton.