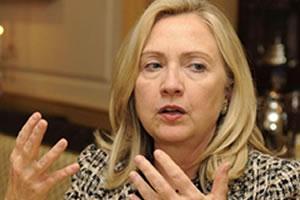 AFP, Honolulu, 12 Nov 2011 - Secretary of State Hillary Clinton urged Iran on Friday to address the latest concerns about its nuclear weapons program urgently and said the United States was consulting with its allies.

Tension between Iran and its two principal foes, Israel and the United States, has risen since the release Tuesday of a UN report saying there was ‘credible’ evidence suggesting Iran’s atomic program was being used to research putting nuclear warheads in ballistic missiles.

Iran, which has long denied any military thrust to its nuclear program, responded to the report saying it would not budge ‘an iota’ from its atomic course and asserted it could confront any attack.

‘Regarding Iran, we discussed the recent report raising serious concerns about the weapons-related work the Iranian government has undertaken,’ Clinton said after talks with Asia-Pacific ministers in Hawaii.

‘Iran has a long history of deception and denial regarding its nuclear program and in the coming days we expect Iran to answer the serious questions raised by this report,’ she said.

‘The United States will continue to consult closely with partners and allies on the next steps we can take to increase pressure on Iran.’

But US Defense Secretary Leon Panetta warned Thursday of the risks of a military strike on Iran, saying it could have a ‘serious impact’ on the region without halting Tehran’s nuclear program.