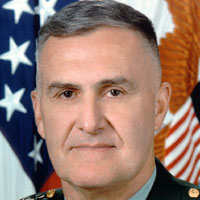 By HUGH SHELTON
Gen. Hugh Shelton was chairman of the Joint Chiefs of Staff from 1997 to 2001.
Newsday Website, 21 Oct 2011 - The death last week of Libyan dictator Moammar Gadhafi means focus will soon shift back to the single most significant threat America is facing: Iran. Officials in the Obama administration are still scratching their heads for an appropriate response to the foiled plot by agents of the Iranian regime to assassinate the ambassador of Saudi Arabia in Washington. All too often with Iranian provocations, U.S. policy options swing ineffectually between the uncreative (economic sanctions) to the unrealistic (military strikes).

One option sure to get the attention of the ruling mullahs in Tehran -- and that could help set the stage for a democratic transition there -- is to unleash Iran’s main opposition group, the Mujahedin-e Khalq (Mek), which remains constrained by an ill-advised U.S. policy.

The MEK was put on the U.S. government’s list of foreign terrorist organizations during the Clinton administration as a well-intentioned but naive attempt to gain the confidence of Iran’s new and, it was hoped, reform-minded President Mohammad Khatami . However, Iran continued to be the world’s No. 1 state sponsor of terrorism and to develop its nuclear program.

The Bush administration left the group on the list, fearful that delisting it would prompt Tehran to escalate its efforts to murder U.S. soldiers in Iraq . That decision was also ill-advised; the Iranian regime not only sent explosives to Iraq, but has continued to train, arm and finance an assortment of terrorist groups, which have been responsible for the deaths and injuries of hundreds of U.S. service members.

Today, 3,400 members of the MEK sit in Camp Ashraf , their Iraq-based home for the past quarter century, after they fled persecution in Iran. After protecting them for six years, the U.S. military handed over the camp to the Iran-backed Iraqi government, which was responsible for two deadly attacks on the camp. At Camp Ashraf, they are useless to America’s larger strategic objective to contain and neutralize Iran’s radicalism.

A large number of prominent former national security officials, including former directors of the CIA and the FBI , James Woolsey and Louis Freeh , President Barack Obama ‘s former National Security Adviser James Jones , and President George W. Bush ‘s Homeland Security Secretary Tom Ridge , agree that the MEK is not a threat to the United States. They point out that the group renounced violence against the Iranian regime years ago and has dedicated itself to secular, democratic governance there. It has already proven an able partner by providing critical intelligence on Iran’s nuclear program and the regime’s role in attacks on U.S. troops in Iraq.

So what’s the holdup?

After the MEK appealed a 2009 decision by the State Department to maintain its designation, the U.S. Court of Appeals in Washington ruled that the government had erred and remanded the case to the State Department for a review. Fifteen months after the ruling, the department has yet to announce its decision. Rep. Ted Poe (R-Texas ) has introduced a congressional resolution urging the State Department to delist the MEK, and it has garnered 95 co-sponsors, including the chairmen of the Armed Services and Select Intelligence committees.

A well-organized lobbying effort by proxies of Iran operating in the United States has tried to demonize the MEK as a cult with terrorist intentions. But this runs counter to all of the experience by the top brass of the U.S. military, as well as intelligence officials who’ve worked with and studied the MEK over the years. It also flies in the face of eight different court rulings in the United Kingdom , the European Union and France, which have resulted in the group’s delisting.

This propaganda war has served Iran faithfully by keeping the MEK in shackles. The MEK’s terrorist designation gives Iran a license to kill its members at will. In addition to the dozens who have already died in Camp Ashraf, many more were hanged by Iranian authorities.

The still-unraveling plot against the Saudi ambassador demonstrates the reach of the Iranian regime in its attempts to destabilize the United States and our allies. It’s ironic that while Tehran’s agents are running loose in this country and may be planning terrorist acts, our government has hampered the opposition the mullahs fear most.

It’s time to revisit this policy. Delisting the MEK is not only warranted by law, it’s the strongest signal the United States can send to the mullahs of Tehran. The timing could not be better.