Monday morning July 26, Reza Joshan, a political prisoner who is on hunger strike in protest against intolerable situation and pressure in prison, was transferred to Gohardasht Prison's clinic and then to another hospital outside prison because of his deteriorating health condition.
Read more ...

Dr Vahid Ahmad Fakhroddin, a law professor and human rights activist was arrested more than 40 days ago and there is still no news of his whereabouts or his health condition. His family is worried about his unknown situation and their constant appeals to authorities have been left unanswered.
Read more ...

According to reports from human rights and democracy activist in Iran, political prisoner Behrouz Javid Tehrani was transferred to a solitary cell in section 1 of Gohardasht prison known as the Doghouse, after being violently beaten.
Read more ... 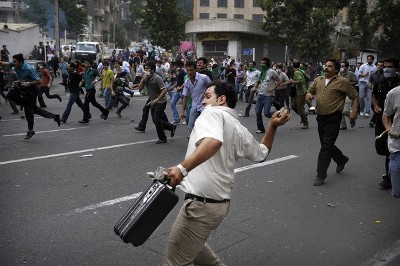 ICFTO - On the third day of a sit-in by students in Sharif University of Technology, the State Security Force prevented over 1,000 students from entering the campus.  At noon, students broke the main gate and entered the university.
Read more ...

The Washington Times - Students face riot police near Tehran University, during a clash which started when police occupied and closed the main entrance gate of the university, in Tehran, Iran, Tuesday July 13, 1999. In a flashback to the revolution that installed Irans Islamic government 20 years ago,police fired tear gas at some 10,000 protesters on the streets of Tehran after they marched for a sixth day in protest of hard-liners who have thwarted efforts to institute reforms.