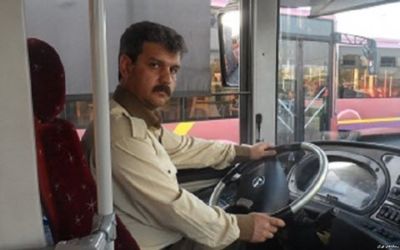 Workers' Syndicate of the Tehran and Suburbs Bus Company said on Wednesday, 16 August 2017 that Reza Shahabi, an imprisoned member of this labour union was on hunger strike in Rajaei Shahr (Gohardssht) prison in Karaj.

Earlier, according to the Syndicate of Tehran and Suburbs Bus Company, the Iranian regime's prosecutor informed Mr. Shahabi's wife that the labour activist had to stay in jail for another 17 months.

Reza Shahabi in a new file that the Syndicate of Workers of Tehran and Suburbs Bus Company calls it “file making or framing” has been sentenced to one year in prison. Meanwhile, the Prosecutor's Office has considered as “absence” the five months medical leave that Mr. Shahabi took with the approval of the forensic.

Following the pressures imposed by the prosecutor's office to return him to prison, Reza Shahabi introduced himself to the Rajaei Shahr prison in Karaj on August 9. According to reports, judicial authorities have repeatedly pressured this labour activist in the past year to return to jail.

Mr. Shahabi was detained by security guards on 12 June 2010, and after 19 months in solitary confinement in Ward 209 of Evin Prison, he was sentenced to six years in prison by the Islamic Revolutionary Court, five years deprivation of union activities and 7.5 million Toman (~$2500) fine.

According to the Syndicate of Workers of Tehran and Suburbs Bus Company, “Reza Shahabi was seriously hurt by the neck and waist due to injuries sustained by the security forces’ violence and mistreatment during arrest, as well as lengthy and overwhelming interrogations.”