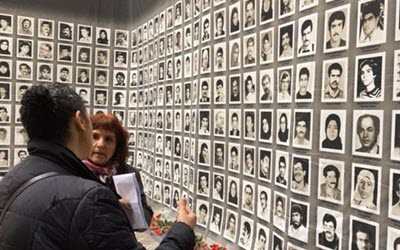 Six human rights organisations that work as consultants with the United Nations Human Rights Council have submitted a joint written statement to the current session of UNHRC about the 1988 massacre of political prisoners in Iran and the need for the international community to hold the perpetrators to account.
In the summer of 1988, the Iranian regime executed tens of thousands of political prisoners held in jails across Iran without due process of law. The massacre was carried out on the basis of a fatwa by the regime’s then-Supreme Leader Ruhollah Khomeini.

On November 27, 2016 a Special Clerical Court in the Iranian city of Qom sentenced Ahmad Montazeri, son of the late Grand Ayatollah Hossein-Ali Montazeri, to 21 years imprisonment and to be stripped of any clerical authority for releasing a tape that captures his father denouncing the 1988 massacre of political prisoners in the Islamic Republic of Iran.

On August 9, 2016 a confidential audio file of a meeting held on August 15, 1988 between Ayatollah Montazeri, former heir to Ayatollah Khomeini, and members of the Judiciary and Intelligence Ministry of Iran, became public after 28 years showing new details of the largest wave of political executions in the world since World War II. In the audio file the perpetrators of the 1988 massacre confirm the executions in their own voices. The mass executions of political prisoners in Iran began in 1981.

After the Iran-Iraq ceasefire in July 1988, Ayatollah Khomeini issued a fatwa (decree) stating:
“As the treacherous Monafeqin (PMOI) do not believe in Islam and what they say is out of deception and hypocrisy, and as their leaders have admitted that they have become renegades, and as they are waging war on God, … it is decreed that those who are in prisons throughout the country and remain steadfast in their support for the Monafeqin (PMOI), are waging war on God and are condemned to execution. In Tehran, Mr. HojatolIslam Nayyeri, Sharia judge, and Mr. Eshraqi (Tehran’s prosecutor) and a representative of the Intelligence Ministry will decide on the fate with a majority vote. In prisons located in provincial capitals the Sharia judge, revolutionary prosecutor, and member of the intelligence ministry will be making the ruling. Those responsible for the rulings should not be hesitant or doubtful and should be most ferocious in the face of infidels”.
When asked by the Head of the Judiciary if this fatwa should apply to those who have already received their prison sentences, Ayatollah Khomeini stated:

“In all the above cases, if the person at any stage or at any time maintains their support for the hypocrites (PMOI), the sentence is execution. Annihilate the enemies of Islam immediately. As regards to the cases, use whichever criterion that speeds up the implementation of the verdict.”

Based on Khomeini’s fatwa, committees, dubbed “Death Commissions” by prisoners, were created. Many of those executed in this wave of executions were prisoners who had been sentenced by the revolutionary courts to several years of imprisonment and were serving their sentences. Some had already completed their sentences, but had not been released or had been groundlessly imprisoned. Others had been released but were re-arrested and executed during the massacre.

In the audio file, Ayatollah Montazeri is heard addressing the death commission. Those present include Mostafa PourMohammadi, representative of the Intelligence Ministry; Hossein-Ali Nayyeri, the religious judge; Morteza Eshraqi, Tehran Prosecutor; and Ebrahim Raissi, Deputy Tehran Prosecutor. Pour-Mohammadi is currently Iran’s Justice Minister, Nayyeri is the head of the Supreme Disciplinary Court for Judges, and Raissi is a member of the Assembly of Experts and the head of the Astan Qods-e Razavi foundation, one of the most important state-affiliated political and economic powerhouses in Iran. He is also a candidate to succeed Khamenei. The following points were made in this meeting:

“In other cities, they committed all sorts of things (crimes) … and in Ahwaz it was really horrendous. This judge, that judge, in this city, in that city, they condemned someone to 5 years, 6 years, 10 years, 15 years. Now executing these people while there have been no new activities (by the prisoner) means that the entire judicial system has been at fault.”
Addressing Pour-Mohammadi, the representative of the Intelligence Ministry, Montazeri said:

“Intelligence had control on the (killings) and had invested in it. Ahmad Khomeini (Khomeini’s son) has personally been saying for 3-4 years that the PMOI affiliates should all be executed, even if they only read their newspaper, publications or statements.”

“15-year-old girls and pregnant women were among those killed. In Shiite jurisprudence even if a woman is ‘Mohareb’ (waging war on God) she shouldn’t be executed, I told Khomeini this but he said no, execute the women too.”

In some prisons, including Kermanshah’s Dizel-Abad Prison, Mashad’s Vakil-Abad Prison, Gachsaran Prison, Khorramabad Prison, Kerman Prison, and Masjed-Soleyman Prison, not a single political prisoner was spared. In other prisons practically all those affiliated with the People’s Mojahedin Organization of Iran (PMOI/MEK) were executed. In one of the wards for women in Gohardasht (Rajai-Shahr) Prison in Karaj, only four out of 200 prisoners survived.

In a letter to Khomeini, dated July 31, 1988, Montazeri protested against the mass executions and unveiled “the death of several thousand people in a few days.” In another letter, Montazeri referred to the killings as a “massacre” and wrote that the PMOI represent an ‘ideology’ and a ‘school of thought’ which cannot be eliminated with executions.

Soon after the start of the massacre of the Mojahedin, prisoners affiliated with other political groups were also executed.

According to numerous reports the procedure of the death commissions was very simple. The first question was: ‘What is your political affiliation?’ Those who answered ‘Mojahedin’ were sent to the gallows. The ‘correct’ answer was ‘Monafeqin’ (hypocrites, the derogatory term used by Iranian authorities to describe the PMOI). According to Montazeri in some cities this response wasn’t enough and prisoners were tested to see if they would be willing to execute other PMOI members or give televised interviews condemning the group. A negative response meant execution.

Those executed in Tehran and other cities were buried in mass graves. Iran's rulers have tried to wipe out all traces of the mass graves. At the end of 2008 and in early 2009, bulldozers flattened the site of mass graves in Khavaran Cemetery in east Tehran. In a statement on January 20, 2009, Amnesty International insisted these graveyards must be kept intact for investigations.

The UN Commission on Human Rights’ Rapporteur on arbitrary executions stated in his 1989 report, “In the days of 14, 15 and 16th of August 1988, 860 bodies were transferred from Evin Prison [Tehran] to the Behesht-e Zahra Cemetery.” This is despite the fact that the majority of the dead were buried in mass graves in Khavaran Cemetery.

Reza Malek, a former senior Intelligence Ministry official who became a whistle-blower and spent 12 years in prison, secretly sent a video clip to Ban Ki-moon from within prison revealing that 33,700 people were executed during the 1988 massacre.

Dr. Mohammad Maleki, the first chancellor of Tehran University after the 1979 revolution and a prominent dissident in Iran, pointed out in an interview with Dorr TV on August 14, 2016 that Reza Malek, who dealt with documents and archives at the Intelligence Ministry, has stated that more than 30,400 of the executed prisoners were from the PMOI, and 2000-3000 were leftist and Marxists.

In a recent article about Rwanda, Mohammad Nourizad, a close associate to Ayatollah Ali Khamenei before the 2009 suppression of the uprising in Tehran, writes:
“Here, in a matter of 2 or 3 months, 33,000 men, women, young and old were imprisoned, tortured and executed. Their bodies were taken to Khavaran Cemetery and barren lands by trucks and buried in mass graves, happy of what they had done…”

British Barrister Geoffrey Robertson, QC, head of the UN Special Court for Sierra Leone, published an in-depth, documented report about the massacre in 2010 despite not having access to all the evidence. In his book entitled, “Mullahs without Mercy” he states these killings are crimes against humanity and can be classified as genocide. Robertson concludes that the international community’s inaction and insensitivity to this crime allowed the Iranian government to feel free to continue violating international law and human rights. He concludes:

“In Iran the prison massacres, by virtue of their calculated cruelty designed by the political and judicial leaders of the state, are more reprehensible than their comparators… The two leaders who advised and implemented the 1988 massacres, Khamenei and Rafsanjani are respectively Supreme Leader and Expediency Council head, and the Death Committee judges remain in judicial place. They deserve to be put on trial at an international court, of the kind that can only be established by the Security Council.” (Page 104)

The General Assembly adopted Resolution A/RES/71/204 on December 19, 2016 which called upon Iran to "launch a comprehensive accountability process in response to all cases of serious human rights violations, including those involving the Iranian judiciary and security agencies, and … to end impunity for such violations". Iran, however, has failed to comply with this call.

What happened in Iranian prisons in 1988 remains a deep scar on the body and soul of the Iranian people. The only way to soothe this wound would be a comprehensive investigation and identifying those who abused their power to execute thousands of their ideological opponents.

On September 20, 2013, the International Federation of Human Rights (FIDH) qualified the events of 1988 as extrajudicial and arbitrary executions and crimes against humanity.

Since the summer of 2016, many family members of victims of the 1988 massacre in Iran have publicly spoken out and demanded justice for their loved ones.

On November 3, 2016, Amnesty International issued an Urgent Action stating that prisoner of conscience Maryam
Akbari-Monfared, who is serving a 15-year sentence in Tehran’s Evin Prison, is being denied access to medical treatment and is facing reprisals after filing a formal complaint that seeks an official investigation into the 1988 mass killings of political prisoners, including her siblings.

'Justice for Victims of 1988 Massacre in Iran (JVMI)', a London-based association of families of the victims of the massacre, former political prisoners, international human rights lawyers and former UN and government officials, has led a campaign to seek the truth, justice, reparation and guarantees of non-recurrence.

According to international conventions there is no statute of limitations for crimes against humanity. It is the responsibility of the international community, including the Human Rights Council and the Security Council, to attend to this matter and to ensure that accountability is achieved. What gives this matter urgency is that the massacre and genocide of 1988 has not come to an end and still continues – for example, High Commissioner Zeid Ra'ad Al Hussein issued a statement deploring “mass executions” in Iran following the execution of 25 Sunnis on August 2, 2016. Additionally the perpetrators of the 1988 massacre still hold key positions and continue to murder their opponents.
Recommendations

In conclusion we recommend: