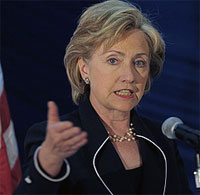 ICFTO - The US has welcomed a decision by the United Nations Human Rights Council to establish a special rapporteur to investigate the deteriorating human rights situation in Iran.

In a statement on Thursday, US Secretary of State Hillary Clinton said Washington applauds the “action by the Human Rights Council to create a Special Rapporteur on Iran who will help the international community monitor and respond to Iran's continuing human rights abuses.”

She added that “this is the first new country mandate established since the Human Rights Council was formed in 2006.”

“The United States worked closely with Sweden and a broad group of over 50 co-sponsors to establish this mandate, which passed by a margin of more than three to one,” the statement added.

“The Special Rapporteur will investigate and report on human rights abuses in Iran and will speak out when the government there does not meet its human rights obligations to its people.”

“Independent investigation and reporting by the Special Rapporteur will help the international community responsibly address the serious human rights abuses in Iran.”

Mrs. Clinton added that the decision will give voice to the many Iranians who long for reform and respect for their most basic of human rights and freedoms.