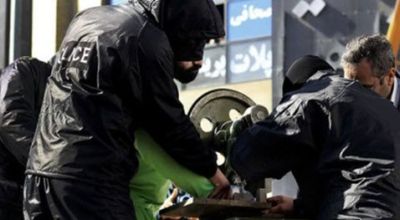 The Iranian regime's deputy prosecutor in the city of Qom, announced that the hands of three person accused of theft were amputated and at the same time four others accused of drug related crimes were executed in Qom central prison.

It is noteworthy than in the month of June, Two young men in Tehran accused of theft were sentenced by the 11th Branch of Tehran Province criminal court to have their fingers amputated.

“I was forced to resort to stealing to come up with money for my wife’s chemotherapy,” one of the accused said.
The defendants are Taghi, 30, and Parviz, 31, by their first names.

The state-run Rokna news agency interviewed one of the defendants whose wife is suffering from cancer:
Q: How many counts do you have?
A: Four counts of theft
Q: Why did you steal?
A: I didn’t have any money to pay for my wife’s chemotherapy while she suffers from cancer. Of course, I don’t know if she’s still alive or not.
Q: Do you have a child?
A: Yeah, two daughters.
Q: Why didn’t you try to find work and not steal?
A: I was wrong
Q: What will you do if they amputate your hands?
A: I don’t know, and I truly regret it. I tried my best to gain their consent, but I’m alone, in prison and no one can help me.
Q: Where is your family now?
A: I don’t know. I’m worried about my wife but they have all forgotten me.
Q: Where did you place what you stole?
A: We sold it to a guy, and they are after him now. He gave us very little money.