At a meeting in Central Hall, Westminster, on Monday MPs and Peers condemned the Iraqi attack last month on Iranian dissidents in Camp Ashraf, Iraq, and called on the United Nations to take over protection of the camp. 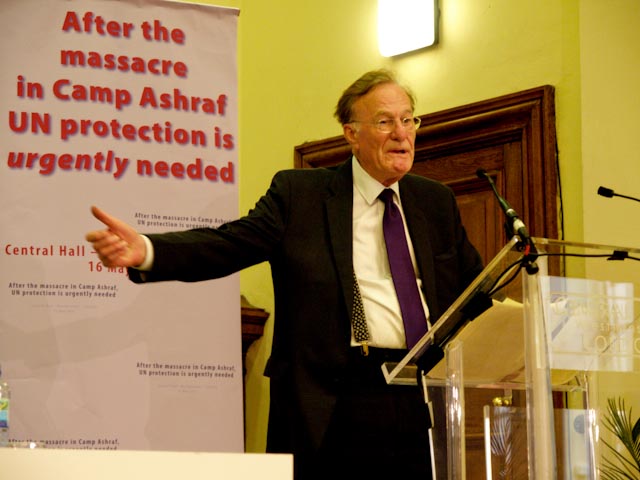 Lord Corbett mentioned that the forced displacement of Ashraf residents inside Iraq or abroad would be tantamount to another bloodbath at Ashraf and he called on the United Nations team in Iraq to take over Ashraf's protection until a permanent solution could be found. "The mullahs in Iran have instructed Iraq to raze Ashraf from the face of the earth and slaughter its residents", he said, adding that Iraq's claim to sovereignty did not give it the right to breach the residents' rights under international law.

David Amess MP said: "We now have a duty to act. The UK and US in particular who led the Coalition into Iraq must now urgently get medical aid to the injured residents who are still today being denied proper medical treatment by the Iraqi forces".

"Our government and the Prime Minister need to play a pro-active role to compel the United Nations to urgently take over protection of Ashraf and ensure the withdrawal of Iraqi forces from the camp. And the siege on the camp must immediately be lifted. There needs to be an independent inquiry by a panel of jurists into the 8 April massacre", Mr. Amess added.

Baroness Turner said: "I was absolutely appalled to see footage of brave women being targeted and shot at by the invading Iraqi army, leading to at least 8 of them, alongside 27 men, being killed. Most of them were courageous women in their 20s who came to Ashraf from Iran to help in the Resistance to bring freedom, democracy and equal rights to Iran. Their cowardly murder by Nuri Maliki's armed forces shows full well the extent to which the fundamentalist mullahs in Iran are influencing Iraq's new dictator".

Lord Clarke said that the Foreign Office needed to put urgent pressure on the Iraqi government to end the pressures on Camp Ashraf, adding that the "war-like situation" there was a humanitarian issue which could not be ignored.

Ms. Miskin said that all the residents of Ashraf are "protected persons" under the Fourth Geneva Convention.

Lady Slynn pointed out that the Law Society of England and Wales last week called on the UK and US governments to take all available steps to prevent further attacks by Iraqi forces on Camp Ashraf.

Lord King said: "Camp Ashraf is a beacon of hope, hope which we have seen spreading in the Arab spring as democracy protests spread across the region. We must support the Camp Ashraf residents as the hope for an entire nation of Iranians who long for a future rid of the Mullahs ruling them and stepping forward towards democracy and freedom".

Lord Maginnis condemned the 8 April attack on Ashraf and joined others in calling for UN protection for the residents.

Mr. Abedini urged the British parliamentarians to continue their strong support for the rights of Ashraf residents to prevent another massacre at the camp. 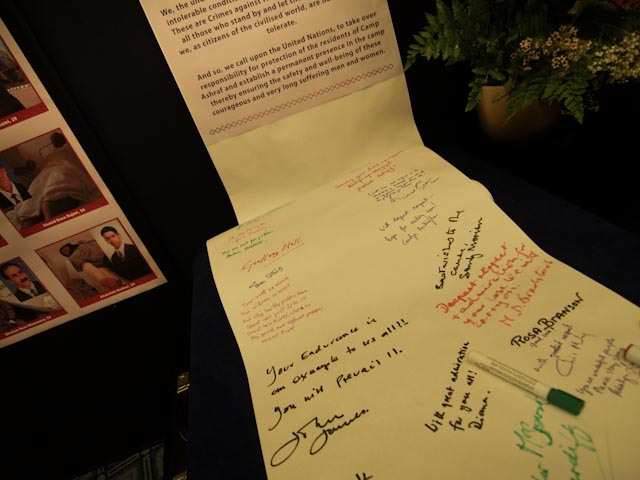