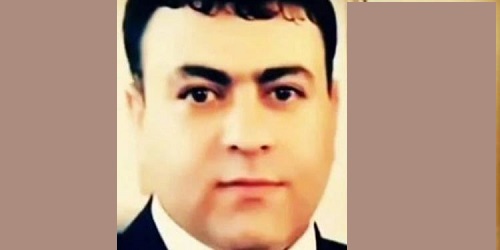 Political prisoner Mehdi Salehi Ghaleh Shahrokhi who was sentenced to death for taking part in peaceful protests, died in a hospital today.
He suffered a stroke in January after being injected wrong medicine in Dastgerd prison of Isfahan where he was detained since arrested. Authorities delayed his transfer to the hospital, putting him at grave risk of death.

He was arrested in November 2019 and, along with four other prisoners, was sentenced to death in addition to five years in prison with hard labor on charges of “participating in the January 2018 Iran protests,” “Moharebeh (waging war against God),” and “Corruption on Earth.”

Death sentences against Salehi and four other men arrested in Isfahan Province, central Iran, Mohammad Bastami, Abbas Mohammadi, Majid Nazari, and Hadi Kiani, in connection with nationwide protests during December 2017-January 2018, were upheld by the Supreme Court on July 30, 2020, despite reports of false “confessions” extracted under torture and evidence contradicting the men’s guilt.

Salehi, a resident of Yazdanshahr, was shot and wounded in the head while helping a friend who had been wounded during the 2018 protests.
He went to the prison health center on December 11, 2021, due to heart and head problems, but suffered a stroke due to the injection of the wrong medicine.
Prison authorities delayed his transfer to the hospital, putting him at grave risk of death.

He was in a coma at Al-Zahra Hospital in Isfahan until March 2022. However, he was surrounded by intelligence and security agents, and his family and small daughter were not allowed to visit him.

Former political prisoners also warned on their social media accounts that Salehi’s case is no accident and has the hallmark of the intentional killings that the regime carries out in its prisons.

In a video message to the mother of Mehdi Salehi, the mother of Behnam Mahjoubi said, “Like my Behnam, only death released your Mehdi from prison. These sentences are very familiar: medical poisoning, wrong medication, or wrong injection. There was no mistake. These are all premeditated murders. This is a scenario to kill our innocent children in prison. [The authorities] must be held accountable, and we will seek justice for the unjust killing of our children.”

Salehi is not the first political prisoner to die of deprivation of medical care in Iran’s prisons. In January, renowned dissident poet and political prisoner Baktash Abtin died in Tehran’s Evin Prison after being denied medical care.
In February 2021, Behnam Mahjoubi, an Iranian Dervish who had been in Evin prison, died from lack of medical care. Mahjoubi was arrested in 2018 during protests by Gonabadi Dervishes in Tehran and sentenced to two years in prison and two years prohibition of taking part in political parties and associations on charges of “association and conspiracy against national security by taking part in an illegal rally.”
According to a study by Amnesty International, since 2010, nearly a hundred prisoners have died in Iran’s prisons because of intentional deprivation of medical care.