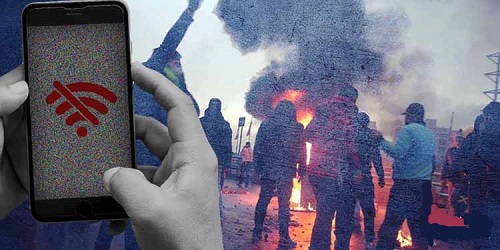 Iran’s parliament voted to restrict the internet amid growing popular discontent and escalating protests, calling for Khamenei’s ouster.
Iran’s parliament on 28 July approved a bill to ban foreign messengers and step up internet censorship. During the unofficial parliamentary session, 121 members voted in favour, and 74 voted against the bill.

The parliament agreed to discuss the bill requiring social media companies to have an office in Iran and be registered with the government.

Failing to do so would see them banned by the authorities. The bill also takes control of the internet away from the civilian government and places it under the armed forces.

After the passing of the bill, it will be forwarded to the Cultural Commission, where it can be put in pilot implementation. The pilot implementation will last between three to five years before it is finalized.
The “Protection of the Rights of Cyberspace Users” project severely restricts the Internet access in Iran.

Talks of the new “bill for the Protection of the Rights of Cyberspace Users” started in early June. According to RSF, the bill is inspired by China and aims to reinforce existing digital barriers to prevent access to social networks and free internet, or in other words, “digital discrimination”.
Iran long has blocked access to many social media websites, like Facebook, Twitter and YouTube.

By approving the bill, Khamenei is trying to curb widespread protests by intensifying repression and censorship, especially after Ebrahim Raisi came to power as the regime’s president.

He intends to block messaging apps such as Instagram and WhatsApp, which are widely used in Iran.
What is in the new bill?

Article 9 of the bill calls for a task force composed of military and intelligence agencies to control internet access in the country.
In addition to user authentication and further monitoring, the bill proposes that armed forces will manage internet gateways, and the bandwidth of foreign apps will be cut in half in comparison with national apps.

The plan by Iran’s parliament also states that 10% of revenues from international internet traffic will be given to national apps, whereas foreign apps will be banned from business services, financial and bank services.

The full detailed plan has been published in Iran’s Laws and Regulation database.