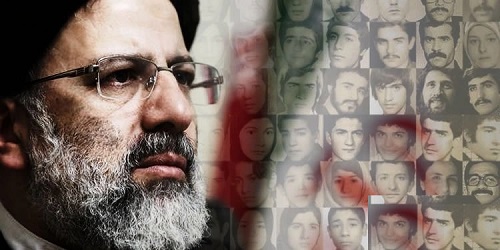 Immediately after Ebrahim Raisi was announced as Iran’s next president, Amnesty International’s Secretary General, Agnès Callamard, said on 19 June 2021: “That Ebrahim Raisi has risen to the presidency instead of being investigated for the crimes against humanity of murder, enforced disappearance and torture, is a grim reminder that impunity reigns supreme in Iran.

In 2018, our organization documented how Ebrahim Raisi had been a member of the ‘death commission’ which forcibly disappeared and extra judicially executed in secret thousands of political dissidents in Evin and Gohardasht prisons near Tehran in 1988. The circumstances surrounding the fate of the victims and the whereabouts of their bodies are, to this day, systematically concealed by the Iranian authorities, amounting to ongoing crimes against humanity.”

The U.N. Special Rapporteur on the situation of human rights in Iran, Javaid Rehman, also called on 29 June 2021 for an independent inquiry into the state-ordered executions of thousands of political prisoners in 1988 and the role played by Ebrahim Raisi as Tehran deputy prosecutor. He told Reuters in an interview: “I think it is time and it’s very important now that Mr. Raisi is the president (-elect) that we start investigating what happened in 1988 and the role of individuals. … There is a widespread and systemic impunity in the country for gross violations of human rights, both historically in the past as well as in the present.”

These bring a duty on the shoulders of the international community to make an independent investigation on the 1988 massacre in Iran.
Therefore, we, the undersigned,

1. Call on the UN Human Rights Council and the High Commissioner for Human rights, Michelle Bachelet, to implement the calls made by Amnesty International and the UN investigator on human rights in Iran.

2. Call on the European External Action Service and leaders of all EU member states to join the UN Special Rapporteur on Iran and Amnesty International to fulfill justice. Family members of the 30000 victims of the 1988 massacre, the majority of whom were from MEK, and those of thousands of protesters who were unlawfully killed during the nationwide protests in November 2019 have our deepest solidarity, and our thoughts go out to them.