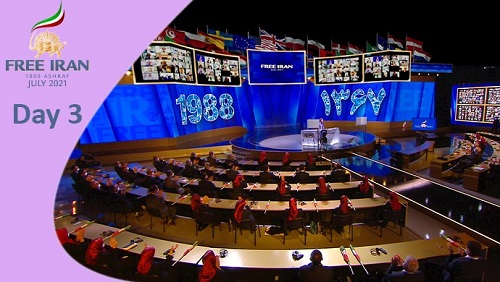 The international community must hold Ebrahim Raisi, the new president of the Iranian regime, to account for his crimes against humanity, politicians from around the world emphasized on the third and final day of the Free Iran 2021 World Summit.
Raisi, a key figure in the 1988 massacre of Iranian political prisoners, has become notoriously renowned as the “henchman of 1988.” He is sanctioned in the U.S. and Europe for his human rights abuses. And the speakers at the Free Iran conference urged their governments not to deal with a regime whose head of state is a murderer.
“As far as the international community is concerned, this is a test of whether it will engage and deal with this genocidal regime or whether it will stand with the Iranian people,” said Mrs. Maryam Rajavi, the president-elect of the National Council of Resistance of Iran (NCRI), in her address to the conference.

“We say to the world community, especially to Western governments, that Mullah Raisi is a criminal guilty of genocide and crimes against humanity in 1988.
“On behalf of the Iranian people and their Resistance, I emphasize that the United Nations and the international community should recognize the 1988 massacre in Iran as genocide and a crime against humanity.

“I call on the UN Security Council to take action to hold the leaders of the mullahs' regime, especially Ali Khamenei, Raisi, and Ejeii, accountable for committing genocide and crimes against humanity. The United Nations must not allow Raisi to participate in the next session of the General Assembly. This would be an unforgivable insult to the peoples of all countries who send their representatives to the United Nations.”

“The choice just made by the Ayatollah has in many ways to me better indication of just how fragile this regime is, and just how close this regime is to collapse,” Rudy Giuliani, Mayor of New York City (1994-2001). “That's a sign that you really feel that things are moving against you, and you have to become as brutal as possible. The selection of Raisi is exactly that.”