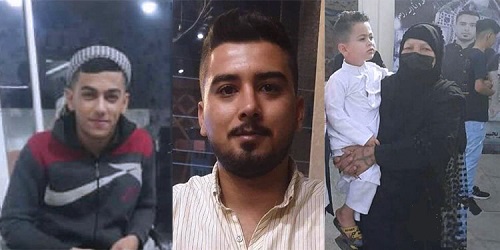 Iranian authorities have embarked on a wave of arbitrary arrests of more than a dozen citizens in Ahvaz, capital of the south-western Khuzestan Province. Among those arbitrarily arrested is the mother of one of the November 2019 uprising martyrs.
The clerical regime arrested some 15 young men and the elderly mother of one of the November 2019 uprising martyrs in Ahvaz and the Port of Mahshahr from Friday, 14May to Sunday, 16 May.
The arrests came simultaneous with the Eid-al Fitr, marking the end of the fasting month of Ramadan. Both cities were hubs of protest during the bloody nationwide uprising in November 2019.
Those arrested had honoured the memories of the November 2019 uprising’s martyrs on Eid-al Fitr, by singing patriotic and epical songs, and paying tribute to them.
According to local sources, the residents held many large gatherings on Eid-al Fitr to commemorate those who laid down their lives in November 2019 or were unjustly executed by the regime. They gathered outside the families’ houses.

Badrieh Hamidavi whose son, Ali Tamimi, was gunned down during the November 2019 protests came out of her house to greet the young men hailing her son. This is why she was arrested.

Mrs. Hamidavi lost another son, Mohammad Tamimi, when security forces shot him in 2012.

Mrs. Badrieh Hamidavi lives in Zowiyeh Neighborhood in Ahvaz. She was arrested on Sunday, 16 May this year, by agents of the Department of Intelligence.

Amin Amir Hatami, 23, who also lives in Zowiyeh Neighborhood was among those arrested.

Agents of the Intelligence Department arrested Hamzeh Chaldavi, 34 and married with four children, on 16 May 2021. Mr. Chaldavi lives in Alavi Shahr Alley of Ahvaz. He had been arrested once before in March 2017 and detained in Shaiban Prison, but was released on bail after several months.

Security forces also arrested Mojtaba Salihavi, from Taleghani Township in the Port of Mashahr. His family have no information on his whereabouts.

However, ther is no information available on the whereabouts of those arrested.