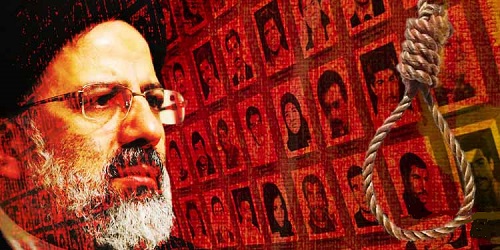 According to the News from Iran upcoming presidential election, Iran’s judiciary chief, Death Commission on 1988 Massacre Judge Ebrahim Raisi declared his candidacy on Saturday for next month’s presidential election.
He said on the local media that: “I have come as an independent to the stage to make changes in the executive management of the country and to fight poverty, corruption, humiliation and discrimination."
Appointed by the regime’s Supreme Leader Ali Khamenei as the head of the Judiciary in March 2019, Raisi has emerged as one of Iran’s most powerful figures and a contender to succeed Khamenei.
He lost to Hassan Rouhani in the 2017 presidential election.

The vote takes place amid systematic violations of human rights in Iran in all its forms.
During the 1988 massacre of 30,000 political prisoners, Raisi was a member of the “Death Commission,” a group of so-called judges who sentenced the prisoners to death in minutes-long trials.

More than 620 executions were carried out in Iran since the Death Commission Judge Ebrahim Raisi took office. Many prisoners were executed after extremely unfair trials, a large number of them from the ethnic minority groups.

According to human right supporter website, at least 22 political prisoners were among those executed during Raisi’s tenure as the regimes Judiciary Chief. They include:

• April 23, 2020: Abdol-Basset Dahani was executed after making confessions under torture.
• April 11, 2020: Mostafa Salimi was hanged for taking part in a prison break following the coronavirus pandemic first coming to Iran
• May 11, 2020: Hedayat Abdollahpour was executed by a firing squad
• July 14, 2020: Diako Rasoulzadeh and Saber Sheikh Abdollah were hanged after making confessions under torture.
• August 5, 2020: Mostafa Salehi was hanged for taking part in the December 2017-January 2018 protests
• September 12, 2020: Wrestling champion, Navid Afkari, 27, was hanged for his role in the August 2018 protests
• December 26, 2020: Abdolhamid Mir-Baluchzehi, 30, was executed in Zahedan Prison. He was tortured to make confessions
• December 12, 2020: Ruhollah Zam was executed in a crackdown on protests in prison
• December 31, 2020: Sunni political prisoners Hamid Rastbala, Kabir Sa’adat Jahani and Mohammad Ali Arayesh were executed in Vakilabad Prison
• January 3, 2021: Hassan Dehvari, 28, Elias Qalandarzehi, 21, and Omid Mahmoudzehi were executed in Zahedan. All were tortured before their execution
• February 28, 2021: Four men from Iran’s Arab minority, Naser Khafajian, Ali Khasraji, Hossein Silawi were hanged in Ahwaz after being severely tortured
• January 30, 2021: Javid Dehghan, 31, a member Iran’s Baluchi ethnic minority, executed in Zahedan
• August 4, 2019: Abdullah Karmollah Chab and Ghassem Abdullah, from Iran’s Ahwazi Arab minority, were executed following months of torture during which both were forced to make false confessions

Unlawful and inhuman tactics to extract false “confessions” in violation of international standards of due process continued to be practiced in Iran under Death Commission Judge Ebrahim Raisi. In addition to physical assaults, sexual humiliation, and verbal abuse, tactics used to extract false statements from detainees include prolonged interrogation sessions.

The Iranian regime beats and tortures political and non-political prisoners as a matter of policy but denies the use of torture. The regime used the forced confessions of political prisoner and protester Navid Afkari, extracted with torture, to incriminate him in court. Navid Afkari was hanged on September 12, 2020.

There have been various reports indicating that the protesters arrested and detained during the November 2019 protests, were “frequently hooded or blindfolded; punched, kicked and flogged; beaten with sticks, rubber hosepipes, knives, batons and cables; suspended or forced into holding painful stress positions for prolonged periods; deprived of sufficient food and potable water; placed in prolonged solitary confinement, sometimes for weeks or even months; and denied medical care for injuries sustained during the protests or as a result of torture.”

The interrogators and prison authorities have also resorted to sexual violence against male prisoners.

The detainees were also subjected to intolerable psychological and physical pressures to confess having contacts with opposition groups, human rights defenders, and foreign media and governments.

The Iranian regime continued to use degrading punishments under the murderer Judge Ebrahim Raisi, even though all international civil and political rights conventions have prohibited the use of inhumane punishments such as flogging and amputation. Revolutionary courts handed out flogging sentences to dozens of religious minorities, protesters and dissidents as well as to those charged with adultery and theft, among other things.
Among those flogged under murderer judge Ebrahim Raisi are: Christian convert Zaman (Saheb) Fadaee, labor activist Davood Rafiee, peaceful protester Ahmadreza Haeri, a member of Syndicate of Workers of Tehran and Suburbs Bus Company Rasoul Taleb Moghadam, social media activist Zohreh Sarv, Azerbaijani rights activists Ali Azizi and Eliar Hosseinzadeh, Kurdish singer and prisoner of conscience Peyman Mirzazadeh, an imprisoned member of the Sufi Gonabadi Order Elham Ahmadi.

The situation of prisons

The Iranian regime breached its obligations based on international covenants on the right to life and on the health of prisoners. It brought tremendous pressure on prisoners. Prisoners of conscience and political prisoners underwent increasing pressure and were harassed, mistreated and tortured in prisons.

There have been numerous reports on unlimited solitary confinement, denial of treatment to prisoners, fabricating new cases against jailed activists and beating and attacking prisoners on the orders of murderer Judge Ebrahim Raisi.

The death of prisoner of conscience Behnam Mahjoubi, who died on February 21, 2021, after untreated medical conditions that included serious neurological issues, brought the grim condition of prisoners, especially prisoners of conscience and political prisoners, under spotlight.
Many other prisoners have either become critically ill or suffer from longstanding and serious medical conditions that have been left untreated in Iran’s prisons.

Breach of freedom of expression, association and assembly

The scale of imprisonments and sentences issued for peaceful rights activists and dissidents and their cruel treatment reveal the extreme lengths the Iranian regime has gone to crack down on peaceful dissent.

After the appointment of the murderer Judge Ebrahim Raisi as the head of the Judiciary, dozens of peaceful rights activists and dissidents were sentenced to harsh prison sentences and even execution for peacefully using their right to freedom of expression.

In addition, bloggers and journalists were imprisoned, and even executed over on vague charges. Those in prison, like Soheil Arabi, are subjected to severe torture.