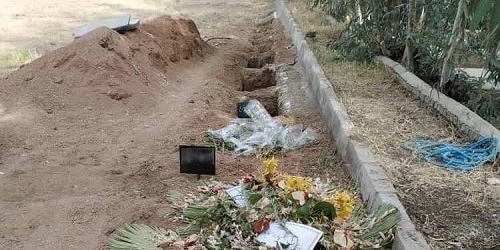 Images recently posted on social media show several new graves being dug over the mass graves in Khavaran Cemetery where the authorities had buried political prisoners executed in 1988 massacre.
At least two people have been buried in these graves in recent days in this area.
Khavaran Cemetery is located southeast of Tehran, where members of Iran’s religious minorities, such as Christians or Baha’is, are buried separately from Muslims.
Within Khavaran, there is a piece of unmarked land, where is the burial site of hundreds, or perhaps thousands of political prisoners who were executed in Tehran during the massacre of 30,000 political prisoners in summer of 1988. The prisoners were hanged after a brief informal questioning by three men who became known as the “Death Commission.”
This piece from Khavaran Cemetery is one of the documents of the 1988 massacre.
Since the mass executions, relatives and friends have visited the graves particularly every year on the last Friday in August or the first Friday in September.

In 2008, some family members of those buried in Khavaran Cemetery reported the excavation of the plot and the planting over the graves; This is in fact an attempt to erase the surviving documents from the 67 executions.

The Iranian authorities have recently banned the Baha’is of Tehran from burying their loved ones in a space previously allocated to them in the cemetery and are putting them under pressure to use the mass burial site to bury their loved ones.
The authorities claim they have recently emptied the site but they are actually are destroying vital evidence and scupper opportunities for justice for the mass prisoner killings.

There are dozens of mass graves containing the remains of political prisoners in Iran; most of these dating from the period 1981-1988. Almost all of the graves are located in remote areas, with no names registered or gravestones marking the site.

Over the past 40 years, the mullahs have repeatedly tried to (and in some cases managed to) destroy these mass graves that link them to the genocide of their people as these should, if the world worked the way it was supposed to, be used as evidence in their trial at The Hague. The idea is to make people forget what happened in Iran’s prisons in the 1980s, particularly in 1988 when 30,000 political prisoners were killed in one summer.
Most of the time, this destruction of evidence is covered up with building work with the hopes that the international community won’t look too closely at roads being constructed in remote areas. Not that they’d have to look that far to see the problem. Two of the sites had cement poured over them in large square shapes, which should have raised suspicions, and other mass graves were covered in rubbish to further insult the victims and discourage the families from visiting.

In May 2017, the regime tried to build a boulevard over other mass graves in Ahvaz, something that was halted following an outcry by the families and an investigation by the Iranian Opposition. Just one month later, authorities promised not to interfere with the graves when building the road, but by June 2018, the government was at it again and razed one mass grave in less than 24 hours, destroying the grave markers left by relatives with large machinery.

Ahvaz is a particularly important site for mass graves because it’s where the first group of executed political prisoners was buried in 1981, followed by many more groups over the years; something made painfully obvious by satellite images.