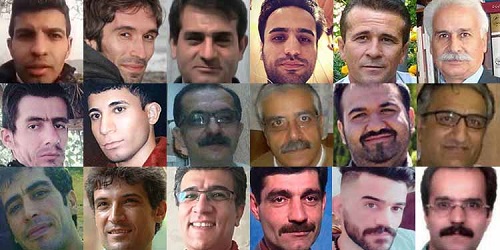 18 Jailed dissidents at Raja’i Shahr Prison of Karaj wrote an open letter on March 21, protesting the exile of political prisoners and opening new cases against them.

The letter, a copy of which was sent to Iran Human Rights Monitor, states: “during the last months, despite all the claims by the highest judiciary authorities about complying with the rights of the political prisoner, what is really happening on daily basis, not only is not a bit of improvement but also they have intensified suppression by making the prisoners conditions even more inhumane.

Their aim is to intimidate people of Iran and political activists to comply with their suppressive policies by making their conditions at prison even worse.

They put pressure on the prisoners and harass their family by transferring them to solitary confinement, offending and humiliating, beating, opening new cases against them and issuing new sentences, exiling them to far away prisons. These suppressive measures and harassments have increased during the last few months.

…It is clear that such measures not only won’t make us to retreat from demanding our human rights but also shows the fear of this regime in face of us demanding justice as it is tangled in a dead end of political, economic and social problems.

It is a decisive fact that as so far regime’s suppressive policies have gained nothing for it, this time too these policies will get it to nowhere and it is doomed.

Iranian authorities have a history of sending political prisoners and prisoners of conscience to exile in remote locations far from their residence.
In the past month the Iranian judicial system has sent several political prisoners to exile as a form of additional punishment in the middle of their prison terms.

The banishments of political prisoners violate Note 3 of Article 513 of the Code of Criminal Procedure, which states that prisoners should serve their terms in prisons close to where they live.

On March 22, civil activist Saeed Eqbali was transferred from Evin Prison to Raja’i Shahr Prison in Karaj, west of the capital Tehran.
Political prisoner Atena Daemi was abruptly banished to Lakan Prison of Rasht on March 16, 2021. The forcible relocation of Atena Daemi took place on the eve of the Persian New Year on March 20.

Atena Daemi was among the signatories of a letter protesting forcible relocation and banishment of political prisoner Maryam Akbari Monfared to the Prison of Semnan.

On March 9, Maryam Akbari Monfared was abruptly relocated from the women’s ward of Evin Prison and banished 110 miles east to the central prison in Semnan.

On January 24, 2021, political prisoner Golrokh Iraee Ebrahimi, was transferred from Qarchak Prison to the central prison in Amol, Mazandaran province in northern Iran, far from her parents.