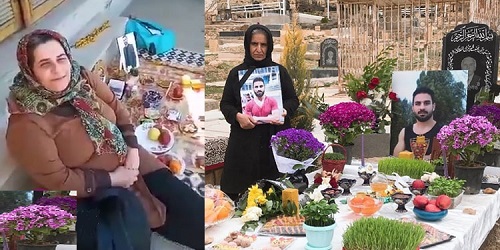 Farangis Mazloum congratulated all Iranians in Iran and abroad and expressed her wish that the upcoming year be the year of Iran’s freedom. She said, “I hope that next year, we would all be together, and all Iranians could live together in happiness and freedom.”

Also, Mrs. Sedigheh Maleki, wife of political prisoner Hashem Khastar, and Fatemeh Sepehri, sister of Mohammad Hossein Sepehri, gathered outside the Central Prison of Mashhad (a.k.a. Vakilabad Prison) at the turn of the year.

The mother and relatives of executed political prisoner Navid Afkari, also celebrated Nowruz and the advent of the New Year by the side of his grave.

Mothers of political prisoners and martyrs seek justice for their loved ones who are innocently imprisoned or executed by the clerical regime without a fair trial.

Mothers of the victims killed during the November 2019 uprising also visited the tombs of their innocent children and remembered them at the turn of the New Year with the traditional Haft-seen.

The clerical regime also sent to exile several female political prisoners on the eve of the Persian New Year. They include Maryam Akbari Monfared and Atena Daemi.

Maryam Akbari Monfared has three daughters and is not going to be able to see them for the New Year visits.

The prisons where these political prisoners are banished to are small, unsanitary and overcrowded, increasing the possibility of contracting the Corona virus which has plagued Iranian prisons across the country.