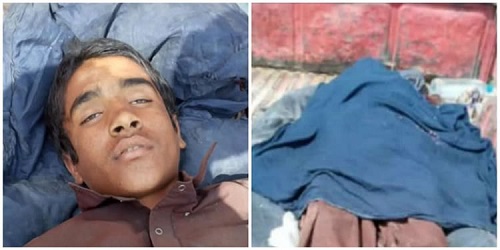 The IRGC forces opened fire on a car on Saturday, killing a child and wonding a woman.

The minor who was killed in Rask Country, southeast Iran, was identified as Younes Yazdanshenas. The woman who is the minor’s aunt, has been identified as Nour Bibi.

According to the Baloch Campaign website, the two were going for medical errands when the police opened fire on them after they passed a checkpoint. The report said that both were transferred to the Chabahar hospital but Younes died due to the severity of his wounds and blood loss.

There are almost daily reports of IRGC and security forces opening fire with impunity, injuring and killing innocent locals in the southeastern cities of Iran.

Last week, police opened fire on Baluch citizens on March 7 and March 8 in the southeastern cities of Minab and Mirjaveh.

In Mirjaveh, police opened fire on a car during a car chase, causing the car to overturn.

The father and son in the car were identified as Mazar and Attallah Gazouie. Attallah, the son, was killed at the scene. His father Mazar was injured and passed away after a week in the hospital yesterday.

In Minab, police opened fire on another fuel carrier, whose car also overturned and caught fire. The driver who was identified as Ahmad Qasemi passed away from the severity of his injuries.