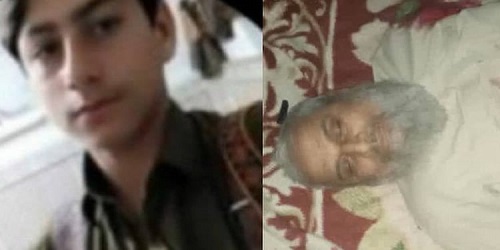 At least two Baluch protesters, including a 13-year-old child, were shot and killed today by the IRGC forces in the Qaleh Bid Base during protests in Zahedan, the capital of Sistan-Baluchistan Province.
Hassan Mohammadzehi, 13 and Mohammad Saleh Motaghedi were shot and killed during the protests on Wednesday, two days after dozens of ‘fuel carriers’ were were killed and wounded in the southeastern province.
On February 22, several of the Baluch locals who carry fuel across the border gathered outside the IRGC base to protest the blocking of the border, demanding that it be reopened. The IRGC has dug large holes on the border to prevent Baluch fuel carriers from crossing. The IRGC responded with bullets killing at least 40 protesters and woundening more than 100 defenseless protesters, according to social media reports and videos.

The Baluch Activists Campaign said the IRGC also torched several cars belonging to the fuel carriers and that the forces used machine guns against locals.

According to local sources, Razi Hospital in Saravan is facing severe blood shortages but the regime is preventing medical help. The authorities have cut off or disrupted Saravan’s internet in order to prevent the spread of the news of the uprising. It has also blocked all the roads to the city.
The regime has blamed the Monday shootings on Pakistan.

Mahmoud Vaezi, the Chief of Staff of the President of Iran said the fuel carriers “clashed with the Pakistanis” adding that everything was now “calm” in the area.

Angry locals on Wednesday took over an Islamic Revolutionary Guards Corps base in Kurin Sarjangal, near Zahedan.
Several cities including Zahedan, Iranshahr, Pahreh, Jakigor and Saravan went on a general strike and refused to open shop Wednesday to protest the killing of Baluch fuel carriers by the IRGC on February 22 in Saravan.