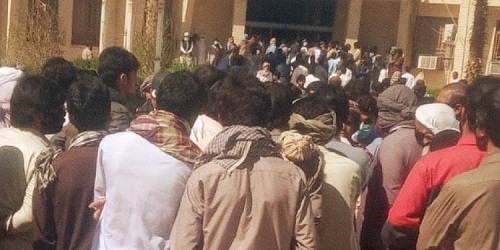 Following the major protests over the killing of fuel carriers in Iran’s southeastern Sistan and Baluchestan province, many protesters have been brutally beaten and detained.
In the past days at least four people were beaten and detained in Iranshahr by Intelligence police. In Shuru, a village near Zahedan, the capital of Sistan and Baluchestan, another three citizens were detained.
Due to the internet blackout, the exact number of protesters killed, wounded or detained is not yet known.
The Baluch Activists Campaign wrote in a report: “Iranshahr intelligence officers on February 26, shot at protesters and arrested at least four people after beating them. On the same day, at least three protesters in Shuro of Zahedan city were arrested by anti-riot forces.

One of the detainees in Iranshahr was identified as Yahya Shekl Zehi. Yahya took refuge in a mosque while wounded from police fire. After discovering his location, Intelligence police arrested Yahya, despite his injured leg, and took him to an unknown location. Yahya’s family have checked several hospitals but have yet to find their son.
The three detained in Shuru were identified by their first names as Zakaria, Saeed, and Abdoljalil.
Protests erupted on February 22 in Iran’s Sistan and Baluchestan after the Revolutionary Guards (IRGC) opened fire and killed fuel porters in Saravan county, near the Iran-Pakistan border. IRGC forces in the Saravan border area opened fire on a group of Baluch fuel porters, killing and injuring several people. Images and videos posted on social media showed dense presence of IRGC forces along with heavy artillery and tanks.
Protests have spread across the Sistan and Baluchestan province since the incident. The regime has cut off internet access to prevent the news of the protests from spreading.
On Friday, Reporters Without Borders expressed concern over the regime-imposed internet blackout across Sistan and Baluchestan “to deprive the population of independent information on the uprising that took place after several civilians were killed by the border police of Baluchistan and to better repress without witnesses.”