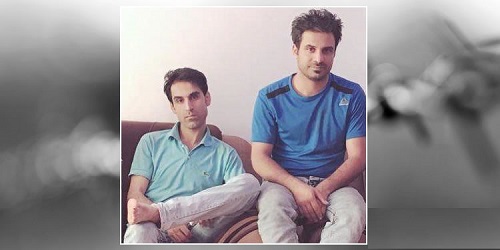 Five months after the execution of wrestling champion and protester Navid Afkari, concerns have raised about the situation of his imprisoned brothers.
The remaining Afkari brothers, Vahid and Habib are currently in solitary cells in the basement of Shiraz’s Adel Abad Prison in southwestern Iran.
Before Navid’s execution on September 12, all three Afkari brothers were beaten and forcibly transferred from Ebrat ward to separate solitary cells in the basement.
During the past five months, the Afkari brothers were deprived phone calls and only could visit their family every two weeks, which has now been suspiciously cut off.
Sources close to the Afkari family say authorities of Adelabad Prison of Shiraz have not permitted the family to visit their two imprisoned sons.

Vahid and Habib Afkari continue to remain in prison after the high-profile execution of their younger brother, national wrestling champion Navid Afkari.
On Sunday, February 7, 2021, Mr. and Mrs. Afkari did not manage to visit their sons despite prior appointment. Their insistence to see their sons did not get anywhere. They were falsely told that their sons, Habib and Vahid Afkari, did not wish to see them.

The Afkari family and their lawyers referred to Adelabad Prison again on Monday, February 8. They asked the prison’s authorities to let them visit their sons and be assured that they are safe and sound. But the authorities did not allow this visit on the pretext that the two detainees are not willing to see their family.

The Afkari family are increasingly concerned about the health of their sons since they are prevented from visiting them.
Iranian authorities executed Navid Afkari, 27, on September 12, 2020, for taking part in protests in 2018.

There had been many calls to stop the execution, including from a union representing 85,000 athletes worldwide.

Two of his brothers were sentenced to overall 81 years of prison and lashes for their participation in nationwide protests in August 2018.
Navid’s letters and voice messages from prison, stressing that he was tortured to make false confessions, led to a global campaign for the termination of his death sentence.

In one of the voice messages, he said that the regime wanted an excuse to hang him.

“Despite writing continuously that I was forced to confess under torture and that there was not even one piece of evidence to prove my guilt in this damns case, they didn’t want to hear my voice.”

“I realized they just want a neck to throw their noose around,” Navid Afkari said in the message from prison.