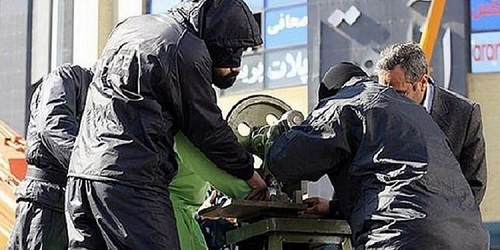 A man was sentenced to amputation, in addition to other charges, in Chaharmahal and Bakhtiari province, in southwestern Iran yesterday.
According to the IRGC-affiliated YJC website, the man was detained for injuring a state environmental agent. He was sentenced to qisas, the Islamic term for “retaliation”, a financial penalty, prison, and confiscation of weapons.
The report did not mention which part of his body would be amputated.
This is not the first time the regime hands out retribution sentences.
In May 2020, a 30-year-old woman who had blinded a man by throwing acid in his face was literally sentenced to an eye for an eye in northeastern Iran, a state-run daily reported.

According to the daily, the woman is a martial arts trainer in Mashhad and was “temporarily engaged” to the 33-year-old man identified as A.A.
She said she was abused by A.A and that he had beaten her in their last meeting before she doused his face with acid in a fit of anger.
The court sentenced her to “eye retribution” or forced blinding. According to the court ruling, she is to be blinded in both eyes but her eye sockets should stay intact.

“This punishment exposes the utter brutality of Iran’s justice system and underlines the Iranian authorities’ shocking disregard for basic humanity. Meting out cruel and inhuman retribution punishments is not justice. Blinding, like stoning, amputation and flogging, is a form of corporal punishment prohibited by international law. Such punishments should not be carried out under any circumstances.”

The International Convention Against Torture, and the International Covenant on Civil and Political Rights which are based on the Universal Declaration of Human Rights, ban inhuman punishments such as amputation of limbs.

The regime also amputates the fingers of thieves.

An annual report by a human rights organization said eight prisoners were currently facing imminent finger amputation in Iran.
According to Amnesty International, Iranian authorities have consistently defended amputation as the best way to deter theft, expressing regret that it cannot be practiced in public and on a widespread basis without international condemnation.