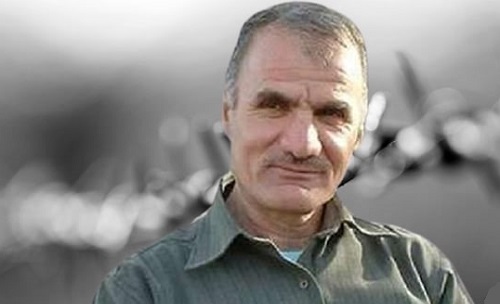 Political prisoner Ayyub Porker who is serving his term in exile in Shaiban Prison of Ahvaz, started his 13th year in prison this month. He has served his term without one day of furlough.

Ayyub Porkar was arrested in January 2009. The Branch 26 of Tehran’s Revolutionary Court sentenced him to death on the charge of Moharebeh (i.e. waging war on God) through collaboration with the People’s Mojahedin Organization of Iran (PMOI/MEK) on November 28, 2009. His sentence was eventually commuted to 20 years in prison by the 36th Branch of the Appeals Court.

The Revolutionary Court of Tehran sentenced Mr. Porkar to death essentially for his opinions and beliefs, his lawyer said at the time. He was sentenced to death for his “effective efforts for the People’s Mojahedin Organization of Iran” while they failed to prove his membership in the organization or his effective efforts.

During his detention, Mr. Porkar was repeatedly pressured by his interrogators and torturers to appear in televised confessions and renounce his beliefs. But he did not give in to these demands.

Ayyub Porkar was removed from Ward 350 of Evin Prison in 2010 and sent to exile to the Prison of Behbahan where he was detained among common criminals imprisoned for murder or on drug-related charges.

In August 2013, political prisoner Ayyub Porkar was transferred to Karun Prison of Ahvaz without any reason or any explanation. After Karun Prison was shut down, he was relocated to Kanoun Prison of Shushtar.

He is presently serving his sentences in Shaiban Prison of Ahvaz.

According to the Punishment Law ratified in 2014, he must have been released from prison after serving 10 years in prison.

Political prisoner Ayyub Porkar at 65 years of age is deprived of the right to conditional release and has not had even one day of furlough since his arrest. The family of this political prisoner, particularly his elderly mother, are not able to travel long distances to visit him.

Ayyub Porkar was born in 1963. He served four years as a pilot in the Air Force during the Iran-Iraq war, but was expelled from his job because of criticizing the government.