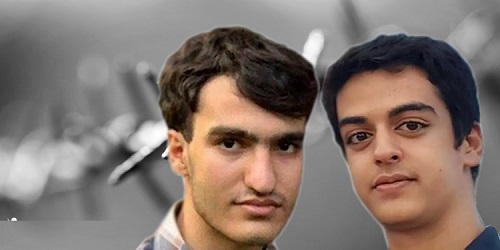 Ali Younesi and Amir Hossein Moradi are still detained in the Intelligence Ministry Ward 209 of Evin Prison in a bid to force them into making confessions against themselves.

Both young men are under torture and have been brought under added pressure to make false confessions.

Eight months since their arrest, the two elite students are under the pressure of the Intelligence Ministry to express remorse and appear on television.

The case of these two students was referred to Branch 29 of the Revolutionary Court of Tehran in November 2020, but the two elite students are still detained in Ward 209 of Evin Prison.

Interrogators have told these students that if they make confessions, they would face lighter charges.

Ayda Younesi, sister of Ali Younesi, announced on her twitter that her brother had been told that if he accepted his charges on a television interview, his execution sentence would be commuted to life sentence.

Ayda Younesi said: The interrogators have told Ali and Amir Hossein that they are the ones who decide their sentences. They said they can issue death sentences, unless they appear for television interviews.

Ali Younesi, a student of computer of engineering, and Amir Hossein Moradi, a student of physics, were two elite students of Sharif University of Technology. Agents of the Intelligence Ministry arrested them on April 10, 2020, without presenting a judicial warrant. They were brutalized at the time of arrest and taken to solitary confinement in Ward 209 of Evin Prison.

They have been arrested for their ties to the People’s Mojahedin Organization of Iran (PMOI/MEK).

Amnesty International has called for unconditional and immediate release of Ali Younesi on May 12, 2020, and July 1, 2020, and stopping torture and mistreatment of this elite student.