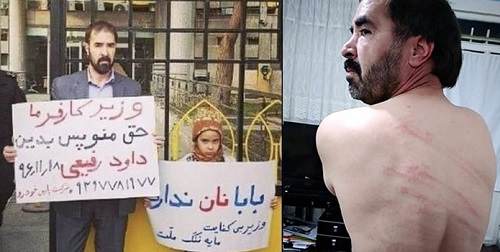 Agents of the Implementation of Verdicts Office flogged an Iranian worker with 74 lashes of whip before his verdict was finalized.

The worker, Davoud Rafii used to work at Iran Khodro car manufacturer before being expelled in 2012. He was sentenced to flogging for insulting the Labor Minister.

This week he reported in to Moghaddas Courthouse to follow up on his case, because the Judiciary had pressured the person who had deposited his bail.

But upon his arrival at the courthouse, he was arrested. Without prior notice and without finalization of his verdict, agents of the Office of Implementation of Verdicts gave him 74 lashes.

Davoud Rafii was fired from Pars Khodro factory after he participated the workers’ protests in 2012.

Mr. Rafii and two other workers were temporarily arrested on November 8, 2016, when had come to the factory to discuss and follow up on their situation.

In 2017, he staged numerous solo-protests in front of the Ministry of Cooperatives Labour and Social Welfare, holding placards containing contents against Ali Rabiei, the then minister of labor. He was repeatedly dealt with by a police unit based in the ministry.

It is said that the Ministry of Labor had offered to pay 200 million tomans to the labor activist in exchange to stop rotesting. However, Mr. Rafii , while emphasizing his legal rights, had said that he wanted his rights in exchange for expulsion between 2012 and 2018, according to official experts.

He was arrested again in 2019 on a complaint from the Ministry of Labor, and was later released on bail pending trial.

The regime regularly hands out flogging sentences to protesters, dissidents, and to those charged with adultery and theft, among other things.
Recently An Iranian man was flogged in Naqadeh, northwestern Iran, early this week for “insulting” a judge.

The man, identified as Mehdi Khairi was flogged 35 times in the Sentence Implementation Unit of the Mohammadyar Public Court. He was tried in absentia by the Court in July.
An informed source said Khairi got into an argument with a judge presiding over a lawsuit he had filed.

“In the final court session, he was detained for getting into an argument. Judge Karim Haji Hatamlu filed a complaint against him,” the source said.
He was also charged with creating “disorder in court” but was acquitted later.

The flogging sentences was later upheld by an appeals court without another trial. Khairi was summoned on November 19 to the 1st Branch of the Court in Mohammadyar, where his sentence was carried out. Mehdi Khairi is a graduate of the University of Qom, south of Tehran, and holds a Master’s degree in Industrial Management.

`More than 100 “offenses” are punishable by flogging under Iranian law. The offenses include theft, assault, vandalism, defamation, and fraud. They also cover acts that should not be criminalized, such as adultery, intimate relationships between unmarried men and women, “breach of public morals” and consensual same-sex sexual relations.