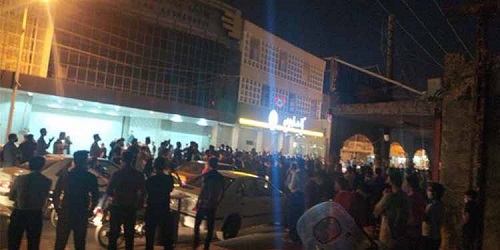 The police chief in Behbahan, on Friday, vowed to deal “decisively” with further protests, a day after security forces fired teargas to disperse protests in the southwestern city of Behbahan.

The city’s police announced in an official statement on Friday that they will decisively deal with the protests.

Speaking to the official news agency IRNA on Friday 17 July, Behbahan Police Chief Mohammad Azizi said that “Vigilantly refrain from any gathering that could be a pretext for the counter-revolutionary movement,” adding they would “deal decisively” with the protests.

He said, “the protest was against the economic situation,” but insisted only “a small number of people” took part.

Azizi warned the protesters on Thursday evening and Friday morning that the crackdown on protests might be heavy-handed.

Hundreds of people took to the streets in Behbahan last night following previous calls against death sentences issued for protesters and the grave state of the economy.
People also chanted for those who were killed during November 2019 protests in Behbahan. “Dashti, rest in peace”. The slogan is a reference to Mahmoud and Mehrdad Dashti Nia, two brothers who were shot on the street in November 2019 in this city.

According to the international Internet Shutdown Observatory NetBlocks, the Iranian government restricted Internet access in Khuzestan Province from around 10 PM local time to prevent news and images of the protests being shared.

According to eyewitnesses and social media users, at least 30 people were arrested on Thursday and Friday. Farzaneh Ansarifard, the sister of Farzad Ansarifard who was killed in Behbahan during the November protests is among those arrested. The names of other protesters arrested last night and today are, Alireza Ansarifar, Meisam Akbari, Mohammad Shariati, Peiman Rasouli, Ahmad Akhash and Majid Zamen Pisheh.