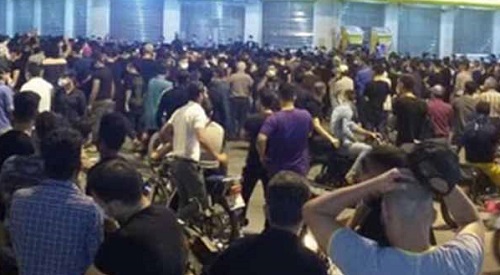 The state security forces fired tear gas to disperse protesters gathered in the southwestern city of Behbahan in the oil-rich Khuzestan Province.

People came out to the streets on Thursday following days of social media protests against the impending death penalty for three young men who were arrested during the protests in November 2019.

Videos from Behbahan show demonstrators gathered outside a branch of the Meli Bank to protest against the execution of Amir-Hossein Moradi, Mohammad Rajabi and Saeed Tamjidi.

Meanwhile, the state security forces increased their presence on the streets of Tehran and several other cities including Isfahan, Mashhad, Tabriz, Urmia and more.

Netblocks, a website that monitors international Internet outages, reported that Internet restrictions were in place in Khuzestan Province from 10 p.m. local time.

Widespread protests started on November 16, 2019, after the regime tripled the price of gasoline.

The authorities responded with unprecedented lethal force, killing at least 1,500 civilians and protesters, including dozens of children.

Behbahan was one of the hubs of the protests with dozens of protesters and civilians being shot and killed by security forces in this area.

Following reports of the official confirmation of the protesters’ death sentence, Iranians all over the world took to Twitter with the Farsi hashtag #اعدام_نکنید, or #StopExecutionsInIran to shed light on the regime’s use of execution to silence dissent and protests.

The tweetstorm under the hashtag “Don’t Execute” reached a record of 8 billion views and five million retweets.