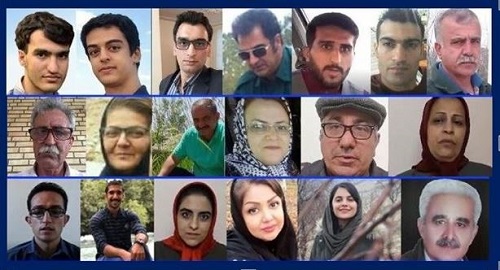 Iran: Urgent call for the immediate release of prisoners of conscience and halt to executions

Currently, the Covid19 fatalities in Iran have exceeded 42,000 deaths, while officials of Hassan Rouhani’s government are formally hiding the real numbers.

Despite the critical situation of the pandemic, Iran has continued to carry out executions of prisoners and still refuses to release prisoners, particularly prisoners of conscience as sanitary conditions have proven to be alarming and threatening.

In addition, the regime has launched a large-scale arrest of its opponents and has suppressed its democratic opposition, which reports daily on the situation of Corona in the country.

On 5 May 2020, the Judiciary in Iran announced that two elite university students, Messrs. Amir Hossein Moradi and Ali Younesi, had been arrested and imprisoned for having links with the Iranian opposition movement, the People’s Mojahedin Organization of Iran (PMOI/MEK).

The opposition has since disclosed the names and photographs of 18 others who have also been arrested on similar charges. They are mainly young Iranians seeking freedom and democracy in Iran.

We write to draw your attention to the ongoing human rights violations in Iran. We are gravely concerned over the ill-treatment and torture of those who have been arrested. Over the past two years, a large number of prisoners arrested in protests have been murdered while in custody. In almost all cases, Iranian authorities claimed that prisoners had committed suicide.

Messrs. Moradi and Younesi, students at Tehran’s Sharif University of Technology, were arrested without a warrant on 10 April 2020. According to reports, Mr Moradi disappeared on that day and Mr Younesi was arrested and was taken home on the evening of the same day, with injuries and torture marks. The regime acknowledged the arrests following protests by students at the University.

Mr Younesi had won the gold medal of the 12th International Olympiad on Astronomy and Astrophysics in 2018. Earlier, he had won the silver and gold medals of the National Astronomy Olympiad in 2016 and 2017. Mr Moradi had won the Olympiad’s silver medal in 2017.
The judiciary spokesman Gholamreza Esmaili claimed, “They wanted to wreak havoc in the country, which was fortunately thwarted by the vigilance and timely action of our intelligence agents.”

In relation to the current wave of arrests and executions, we condemn the arrest of opponents, educated youth, elite students, and Iranian citizens for taking part in protests and for supporting the cause of freedom and urge for the immediate and unconditional release of these prisoners.

We urge the EU High Representative to call on Iran to secure the release of the detainees and to respect the rights of citizens to freedom of expression and freedom of association. Therefore, we request for a fact-finding mission to visit prisons and report on the conditions of detainees.

Silence and inaction are counterproductive and will be misconstrued by Iran as a green light from European Union vis-à-vis Tehran’s egregious human rights abuses. We reiterate our stated position that relations with Iran have to be conditioned to a halt to executions and clear progress on human rights.
Sincerely,

Friends of a Free Iran