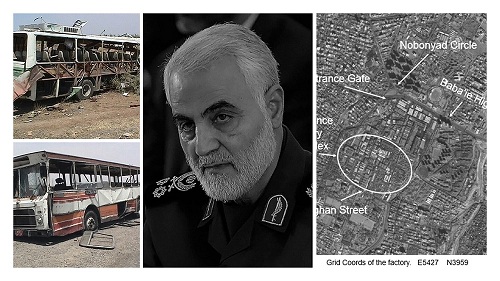 The overwhelming majority of Iranians despised Soleimani, an infamous symbol of the regime’s intimidation and murder, for his crimes against the Iranian people and throughout the region. The Iranian people and Iraqi protesters who have been calling for Soleimani’s expulsion from Iraq for some time welcomed his death as a sign of the waning of the regime’s control over their country.

Soleimani, carrying the rank of major general, was Khamenei’s hatchet man and a hated figure. During uprisings in Iran in 2018 and 2019, protesters tore up and torched his posters in different cities.

Qassem Soleimani was born on March 11, 1957, in a village near the town of Baft, in the southeastern province of Kerman. He did not finish his elementary education. He worked as an unskilled construction laborer while he was very young. He did not receive any military training. Yet he rose to the top of the IRGC command because of his ruthlessness and loyalty to the regime’s Supreme Leader.

In 1998, Soleimani was appointed as the commander of the terrorist Quds Force, the extraterritorial arm of the Islamic Revolutionary Guard Corps (IRGC).

The terrorist Quds force is a military body founded shortly after the 1979 revolution with the sole purpose of suppressing domestic opposition and waging terrorist wars beyond Iran’s borders.

The mandate of the IRGC is to expand the fundamentalist ideology of the mullahs through killings, terrorist acts, and hostage-taking.
The Quds Force plays a very special role in the IRGC and is tasked with orchestrating the regime’s meddling in countries of the Middle East region, from Iraq to Syria and Yemen, and as far as the African continent.

Although the Quds Force is assigned missions outside Iran, Soleimani, as a senior member of the IRGC’s high command, was also a major contributor to the regime’s repressive apparatus inside Iran.

In July 1999, at the height of student protests, he signed a letter along with other IRGC commanders, warning then-President Mohammad Khatami that if he did not put down the revolt, the IRGC would intervene.

“Our patience has run out,” Soleimani, along with other IRGC Generals wrote. The police crushed the demonstrators, as they did again, a decade later in 2009.

Soleimani played a key role in the killing of the members of the People’s Mojahedin Organization of Iran (PMOI/MEK) in camps Ashraf and Liberty in Iraq.

Before the 2003 U.S.-Iraq conflict, Soleimani orchestrated several attacks against MEK bases in Iraq.

From 11 January 1993 to April 2003, Iran’s terrorist Quds Force carried out over 150 terrorist attacks against the MEK in Iraq.

The Quds force developed the " Improvised Explosive Device (IED)" to target MEK convoys in Iraq in the 90s. By the end of 2002 over 12 roadside bombs, including IEDs and car bombs were used against MEK convoys, causing death and injury of tens of MEK members. One of the worst attacks was carried out on June 9, 1999. A roadside bomb was detonated alongside the Baghdad-Khalis road as a bus full of MEK members was passing, causing the death of six passengers and the injury of 21 others. Also, several local Iraqi cars were damaged, an Iraqi bypasser was killed and many others were injured.

Soleimani’s most heinous crime occurred on September 1, 2013, which became known as the “Camp Ashraf Massacre,” when Quds force proxies, including Kata’ib Hezbollah and Asa’eb Ahl Al-Haq, attacked Camp Ashraf in Iraq’s Diyala province. At the time, only 101 MEK members were residing there as custodians of their properties under an agreement with the UN and the US. The attack led to the execution-style killing of 52 defenseless MEK members. Seven others, including six women, were taken, hostage. Soleimani personally oversaw the plans of the massacre. Two days after the attack, he attended the regime’s Assembly of Experts and described the massacre as “more important than the Eternal Light operation,” referring to a widespread MEK operation in 1988 which nearly overthrew the regime.

Altogether from 2009 to 2016, Quds Force proxies in Iraq under the command of Qassem Soleimani killed 141 members of the MEK in terrorist attacks and wounded thousands more.

With the Quds Force under his command, Soleimani was in charge of all the terrorist attacks of the Iranian regime and its proxy groups all across the world. He has orchestrated attacks in places as far-flung as Thailand, New Delhi, Lagos, and Nairobi—at least thirty attempts in 2011 and 2012 alone. Soleimani symbolized the IRGC’s savagery and thirst for blood and aggression to other countries.

All the Shiite terrorist organizations throughout the Middle East, including Kata’ib Hezbollah, Asaeb al-Haq in Iraq, the Lebanese Hezbollah, and many other groups in Syria, Yemen, Bahrain, and … were under the command of Soleimani.

SOLEIMANI, AND IEDS IN AFGHANISTAN AND IRAQ

The devastating IEDs were used extensively during the war in Iraq between 2003 and 2011, and it is called the number one killer of the war.
In April 2019, Pentagon announced that Iran is to blame for 17 percent of all U.S. service personnel deaths between 2003 and 2011. Details of the news were reported by US media including Newsweek.

“Iran was responsible for the deaths of at least 608 American troops in Iraq between 2003 and 2011, according to a newly revised casualty estimate produced by the Pentagon. “The Newsweek report reads.

If we add the civilian casualties, the crimes committed by the Quds force and Soleimani become more evident. A special report by the UN Assistance Mission in Afghanistan (UNAMA) revealed the following:

“Between 1 January and 30 September 2018, IEDs have caused almost half of the civilian casualties from conflict-related violence.”

EFPs were built under a confidential order by the Quds Force in Iran. Explosively formed projectiles were advanced improvised explosive devices that were harder to detect, could penetrate thicker armor and be more lethal than traditional IEDs. The National Council of Resistance of Iran revealed the exact location of the factories on July 25, 2006, and 29 January 2009.

Soleimani was also responsible for the killing of thousands in Syria. It was reported in the press that in 2012, Syrian dictator Bashar al-Assad was in a difficult situation. His army was not fighting for him. Soleimani boasted he would bring Bassij brigades to help. It was also reported that in August of that year, 48 Iranians were captured inside Syria posing as pilgrims later to be identified as Quds Force members. Soleimani began to bring in foreign militia forces composed of Hezbollah members and Iraqi Shiite militias. His second in command, General Hossein Hamedani was settled in Syria, and supplies began to fly in heavily from Iran. Soleimani reassembled different Syrian intelligence apparatus parts as the number of Quds Forces officers and their foreign proxies present in Syria rose to thousands. 2,000 Hezbollah fighters joined the concert in April 2013. Finally, Soleimani helped save Assad from his inevitable downfall with no less than 80,000 fighting forces under Quds force’s command and by using brutal tactics and destroying the towns and villages and massacring the civilians.

SOLEIMANI’S ROLE IN KILLING THE PROTESTERS IN IRAQ AND IRAN

During the 2019 unrest in Iraq, Soleimani visited Baghdad several times and led the repressive forces in that country to suppress the protests. The repressive forces adopted a new deadly tactic: snipers targeting protest leaders from rooftops during demonstrations. These snipers shot most of the 450 protesters killed during the protests. The protestors apprehended a few snipers with Iranian identity cards. In November, when protests erupted across Iran, the regime used the same deadly tactic. More than 1,500 protesters, mostly youth in their twenties, were shot from rooftops by snipers belonging to the Quds Force. Soleimani was the mastermind for such killings in Iraq and Iran.

Soleimani’s crimes mentioned in this report are just the tip of the iceberg and his bloody fingerprint can be seen in all the crimes of the Iranian regime in the past 40 years. One of Soleimani’s notorious acts abroad was a scheme, in 2011, to hire a Mexican drug cartel to blow up a popular restaurant in Washington, DC, in which the Saudi Ambassador to the United States was dining.

A FINAL WORD ABOUT SOLEIMANI'S DEATH

After the elimination of Qassem Soleimani, some in the west tried to portray him as a “Hero for the Iranian people” or a “genius war strategist”. The fact is that Soleimani was neither a “Hero” nor a “genius war strategist”; he was merely a cruel butcher who would pursue his goals with maximum brutality and carnage. His proxy militias in Syria and Iraq would pursue their objectives without having any principles or red lines; from massacring and displacing civilians from their towns and villages to dropping conventional or unconventional weapons, including flammable and cluster bombs or chemical weapons on residential areas.

Qassem Soleimani had no mercy towards his militias either. He sent thousands of untrained and poor Iraqis, Afghans and Pakistanis to their death in war fronts in Syria by promising money to their families. Soleimani, this “genius war strategist,” learned this tactic during the Iran-Iraq war, while the Iranian regime and the IRGC commanders like Soleimani were dispatching tens of thousands of children in “human waves” to clear minefields with their bodies. This was Soleimani’s tactics and strategy in the war fronts, he compensated the lack of military knowledge and command weakness with “human waves” and massacre of civilians, and by resorting to scorched-earth tactics.

Therefore, Soleimani was simply a criminal with no principles and human feelings who would pursue the supreme leader’s directives with terrorism and cruelty. That is why with his elimination, the Iranian regime has lost the mastermind of its terrorist activities, one of the key planners of its attacks on the opposition and the main person who was keeping its ranks together beyond its borders. The IRGC and Quds Force will not be the same without Qassem Soleimani, and the weakening of the IRGC will win in turn weaken the regime in its entirety. This will further incapacitate the regime in the face of ongoing uprisings in Iran, Iraq, and Lebanon, where Soleimani was one of the most hated figures.