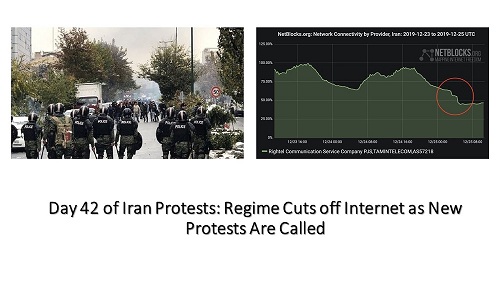 Thursday, December 26, 2019, marks the 42nd day since the death of over 1500 people who were killed in the Iran protests in November by the Iranian regime's security forces. Reports by the main Iranian opposition group indicate that since Wednesday the regime has restricted the internet in fear of the traditional fortieth day anniversary memorial of protesters killed in the November uprising.

Reports indicate that internet access has been disrupted in the provinces of Tehran, Khuzestan, Alborz, Isfahan, Lorestan, Kurdistan, Kermanshah, Zanjan, Bushehr, and other locations. Authorities have also disrupted some mobile networks. There have been calls for new Iran protests today in various cities in Iran.

Iranian opposition leader Mrs. Maryam Rajavi has once again called on the United Nations to urgently send an international fact-finding mission to the prisons to meet with the detainees. According to the MEK, the Iranian regime has killed more than 1500 protesters. The MEK has so far identified 601 of these martyrs.

Reports obtained by the People’s Mojahedin Organization of Iran (PMOI/MEK) from inside the Iranian regime’s Revolutionary Guards (IRGC) indicate that the IRGC has issued an alert to all of its forces.

According to this statement, the IRGC’s units should start patrolling at 9:00 am and 14:00 PM local time with full anti-riot equipment. The purpose of this action is spreading fear among people and preventing any possible protest.

In addition, in its statement the IRGC has especially highlighted the establishment of post guards and special patrols.

By the direct order of the IRGC’s commanding office, some units are assigned to protects the regime’s “Islamic Republic of Iran Broadcasting (IRIB)” corporation and some other barricades and military bases.

The regime takes these oppressive measures to prevent the eruption of a possible uprising to mark the 40th day memorial ceremony of the Iran protests’ martyrs.