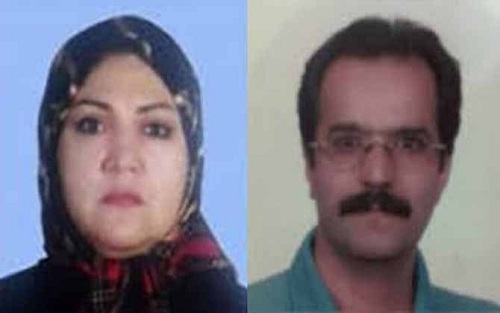 Iran authorities hve banned Iranian political prisoner couple Fatemeh Mossanna and Hassan Sadeghi from visiting each other in prison. The ban was ordered because Hassan refused to wear prisoner clothes and shackles for the transfer.

The ban was ordered because Mr. Sadeghi did not accept to wear the prisoners’ garb and be transferred with shackles and handcuffs. The prison’s supervisor thus ordered cancellation of the visit, the first after several months.

The Iranian political prisoner couple were arrested on 9 April, 2014, for organizing a morning ceremony for Hassan Sadeghi’s father Gholamhossein Sadeghi, deceased on 29 January, 2014, in Camp Liberty, Iraq, where PMOI members were held under siege.

Since 2015, political prisoners Fatemeh Mossanna, detained in the Women’s Ward of Evin Prison, and Hassan Sadeqi, detained in Raja’i Shahr Prison in Karaj have been serving 15-year prison sentences.

The government has confiscated the entire political prisoner couple’s properties, including what Hassan Sadeghi had inherited from his father.
Iranian law allows the state to confiscate properties under certain conditions, leaving citizens with no means of legal recourse.

Hassan Sadeghi previously served six years in prison in the 1980s from the ages of 15 to 21 for engaging in political activities related to the People’s Mojahedin Organization of Iran.

Thousands of political prisoners were executed without trial during the 1980s. The majority of those victims were PMOI/MEK members and supporter.
During that time, when Fatemeh Mosanna was only 13 years old, and her mother Ferdows Mahboubi served two and four years in prison respectively. Three of her brothers —Ali, Mostafa and Morteza Mosanna were executed, all for the charge of “cooperation with the PMOI”.