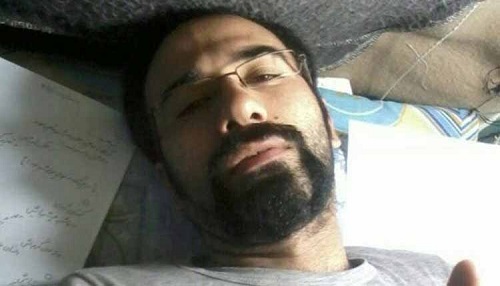 In an open letter the political prisoners said, “Hear the sound of our protest. We heard your protests from inside this prison. We don’t want a tyrannical regime.”

“By going on hunger strike, we political prisoners incarcerated in Evin prison will join the opponents of the dictators and we demand the overthrow of this tyrannical regime. Wherever we look, we see poverty, economic divide, and tyranny. Silence is complicity with the tyrants,” the Iranian political prisoners wrote in their letter.

“Sahar set herself on fire, Farangis cried out in protest, and we will take the sleep away from [the regime’s] eyes with our hunger strike,” Arabi and Haj Jaffar Kashani wrote in their letter, referring to Sahar Khodayari, a young woman who set herself alight outside a courtroom, after learning she may face imprisonment for trying to enter a stadium.

“The agents of the fundamentalist regime have destroyed our homeland. Our people have been bearing the pain for 40 years. It’s time for freedom. Indeed, we learned from Sahar, Sattar, Gholamreza, Mohammad, Vahid and Mostafa, Saneh, and Alireza that to die standing is better than to live under tyranny,” the political prisoners wrote, referring to the names of political prisoners and activists executed and murdered by the regime in the past years.

Ms. Farangis Mazloum, the mother of political prisoner Soheil Arabi, was arrested by security forces on 22 July, 2019, and is currently being held at the Ministry of Intelligence’s detention center, Ward 209 of Evin Prison. She is being held in prison only for defending her son and being the voice of this political prisoner.

She started a hunger strike on 16 August, 2019, to protest her unlawful detention.

Haj Jaffar Kashani, civil rights activist and football referee, has been in prison since 2018, and has been under difficult conditions since his arrest.
The Headquarters of Tharallah, a fearsome security body affiliated with the Islamic Revolution Guards Corps (IRGC) arrested 33-year-old blogger and photojournalist, Soheil Arabi, in November 2013, at his home in Tehran.

Arabi spent two months in the IRGC’s Ward 2-A in Tehran’s notorious prison, Evin, before being transferred to Section 350 which is under the control of the Iranian judiciary.

On 30 August, 2014, a five-judge panel of Branch 76 of the Criminal Court of Tehran sentenced Arabi to death for sacrilege and “insulting the Prophet of Islam” in eight Facebook accounts allegedly belonging to Arabi.

Furthermore, On 4 September, 2014, Branch 15 of the Tehran Revolutionary Court also sentenced Arabi to three years on charges of “insulting the Islamic Republic’s Supreme Leader,” Ayatollah Ali Khamenei, and “propaganda against the state” in his postings on Facebook.

Two years later, the sentence was commuted to seven and a half-year imprisonment, as well as hand copying thirteen Shi’a textbooks and studying Shi’ism.