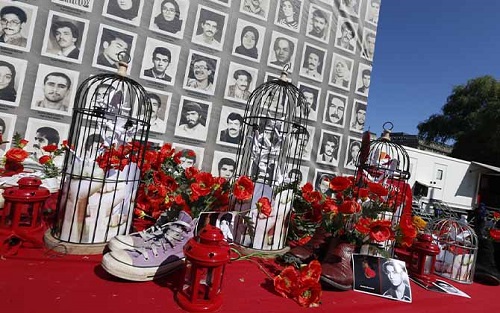 The Iranian regime has a history of cracking down on its opponents. Incommunicado detentions, arbitrary abductions, summary executions, torture and enforced disappearances are among practices commonly used against opponents.

Dissident intellectuals and students, ethnic groups and religious minorities, and members and supporters of the People’s Mojahedin Organization of Iran (PMOI/MEK) have always been targeted.

With the brutal suppression of the last demonstrations in Tehran and other cities which peacefully demanded freedom on 20 June, 1981, the regime’s crackdown took a sharp turn and climaxed during the 1988 massacre of 30,000 political prisoners.

In summer 1988, a wave of intense killings began in Evin and Gohardasht prisons, in Tehran and Karaj, respectively. The mass executions then extended to other prisons all across the country. Tens of thousands of political prisoners mostly members of the PMOI were among victims of enforced disappearances in Iran and extra-judicially executed during the massacre.

Many of the victims had served long prison terms and were waiting to be released. Some had already completed their original sentences but were never released. Prisoners, including women and teenagers, were hanged within minutes of being questioned by members of the infamous “death commissions.”

Another important incident taking place outside the prisons but parallel to the massacres inside was the widespread enforced disappearances of former prisoners or supporters of the PMOI/MEK and their subsequent executions.

The victims were hanged by forklift trucks and cranes or from beams in half-constructed buildings, in groups of five or six at half-hourly intervals all day long. Others were killed by firing squads.

The numbers of those executed were too many to be buried individually. They were collectively ditched in purpose dug trenches constituting mass graves. This method had been used occasionally in Tehran and elsewhere since 1981, but in 1988 it became a systematic procedure to dispose of prisoners’ bodies.

It is estimated that there are more than 120 mass graves across Iran that contain the remains of the victims of the 1988 enforced disappearances in Iran and killings.

Many relatives of the massacred victims were never told about the killings or where their loved ones had been buried.

Months later, the families desperate for information about their children or spouses, would be handed a plastic bag with their few possessions. They would be refused any information about the location of the graves and ordered never to mourn them in public.
In many cases, no death certificates were ever issued.

Families who sought to find the graves of their loved ones have been arrested and tortured.#

The Iranian regime has so far, taken numerous measures all across Iran to eliminate the traces of the mass graves belonging to the victims of the 1988 massacre. They have built new buildings and roads on these graves, or have bulldozed them and turned them into new cemeteries.

None of the regime officials have ever been prosecuted for their involvement in the massacre and many of those involved are holding high positions of power within the government.

Families are unable to legally inquire about their relatives inside Iran

More than three decades after the harrowing 1988 massacre, the fate and whereabouts of victims of enforced disappearances are still unknown to their families.

It is almost impossible for the family members to achieve justice when many of the perpetrators of that crime against humanity are today in senior government posts and have never been held accountable.

Family members who dare to seek the truth and justice have faced relentless harassment, intimidation, arbitrary arrest and detention, as well as torture and other ill-treatment.

In 2011, the Iranian authorities executed Ali Saremi, a supporter of the PMOI, who had served 23 years behind bars for his peaceful activities.
Ali Saremi had never participated in any acts of violence. The only reason he was arrested in 2007 was because he had delivered a speech at Khavaran Cemetery outside Tehran, the site of unmarked mass graves of victims of enforced disappearances in Iran and the 1988 massacre.

Mansoureh Behkish lost six siblings during the 1988 massacre. She is one of those targeted for their peaceful activities inquiring about the truth and seeking justice.

Her activities include: holding memorial services at her home for political prisoners summarily executed or forcibly disappeared during the 1980s, including her sister, four brothers and a brother-in-law; paying visits to the families of victims; taking flowers to Khavaran where two of her brothers, are buried in unmarked mass graves; and posting her writings about Iran’s human rights violations on Facebook and other online platforms.

Raheleh Rahemipour, a 65-year-old human rights defender, has been prosecuted in reprisal for filing a complaint with the UN on the enforced disappearances of her brother and his infant daughter, Golrou, while they were held in Tehran’s Evin prison between 1983 and 1984.

Ms. Rahemipour has been sentenced to two years in jail for demanding justice.

Shockingly, Intelligence Ministry officials told Ms. Rahemipour that they would stop her persecution if she agrees to withdraw the complaint that stands before the United Nations.

In February 2017, political prisoner Maryam Akbari-Monfared asked the UN to help her find the truth about the fate of her siblings, Roghieh and Abdolreza, who were victims of enforced disappearances and executed in 1988 massacre.

The Iranian regime verbally informed the family of the execution of their children, but has never revealed their places of burial, leading the UN Working Group on Involuntarily and Enforced Disappearances to recognize the two victims as enforced disappeared persons.

Maryam Akbari-Monfared lost three brothers and a sister in the 1980s under the clerical regime. Ms. Akbari-Monfared was, herself, arrested on December 31, 2009, and held incommunicado for five months. She was kept in solitary confinement during the first 43 days of her detention and interrogated without access to a lawyer. She was tried by Branch 15 the Revolutionary Court of Tehran and sentenced to 15 years in prison.

The regime ruling Iran has evaded publishing the information and details of the massacre of political prisoners in 1988 but has remained immune from international accountability.

They have refused to provide families, the addresses of the graves of those executed. They have destroyed the mass graves, but have remained immune from any form of accountability.

Since 2016, the names of nearly 100 “Death Commission” members have been revealed.

Some of the officials in charge of enforced disappearances and extrajudicial executions and members of the Death Commissions are among the highest officials presently running the regime, including Ebrahim Raisi, the Chief Justice and head of the Judiciary, the Head of the Supreme Court and the so-called Justice Minister. All of them, however, are immune.

A number of them, including the mullahs’ supreme leader Ali Khamenei, defend the 1988 massacre. They even say that they are proud of it.
As Amnesty International pointed out in its report last December on the 1988 massacre, Iran faced an immunity crisis, and the continuity of crimes in Iran are directly related to the impunity the Iranian regime officials enjoy.

So long as the details of the fates and whereabouts of those killed extra-judicially remain concealed, the crimes of enforced disappearances, committed at any time, will continue to remain as human rights violations not subject to any statute of limitations.

In December 2018, Amnesty International published a 201-page report, “Blood-soaked secrets: Why Iran’s 1988 prison massacres are ongoing crimes against humanity.” Amnesty International called on the UN to launch an independent investigation to help bring those responsible for these abhorrent crimes to justice.

Meanwhile, recent remarks by Mostafa Pour Mohammadi, advisor to Iran’s head of the Judiciary, where he defended the mass extrajudicial executions of 1988, shed light on the regime’s atrocities and how they continue to this day, underlining the need for a competent international court commissioned by the UN to bring its perpetrators to justice.

Pour Mohammadi was a member of the “Death Commissions” which ordered the executions of thousands of prisoners, who were serving their prison terms in 1988.

Pour Mohammadi, who served as Hassan Rouhani’s Minister of Justice (2013-2017), recently defended the horrific killings and enforced disappearances of thousands of dissidents who were mostly members of the PMOI/MEK.

Speaking to the weekly Mossallass, the 59-year-old Pour Mohammadi insisted that he should not be held accountable for the mass executions of summer of 1988. Instead, he blamed the victims, asserting that all remaining members of the PMOI should also be held responsible, tried, and punished.

When asked about the 1988 mass executions and the “slanders” directed at the regime for the massacre, Mostafa Pour Mohammadi said the regime was “at war” and no one should expect it to follow “legal procedures and consider citizen and human rights” at a time of war.

Pour Mohammadi’s remarks provide a stark reminder of how the regime’s officials have become emboldened in continuing their crimes after years of enjoying immunity as a result of the international community’s turning a blind eye on their atrocities.

To this day, the Iranian regime brands its opponents as “enemies of God” and executes them without a proper judicial process or legal representation.
• Kurdish political prisoners Shirin Alam Holi, Farzad Kamangar, Ali Heidarian and Farhad Vakili were executed in 2010. The victims’ bodies were never turned in to their families and the regime has continued to conceal the truth regarding their executions and burial.

• The UN Working Group on Enforced or Involuntary Disappearances (WGEID) has recently recognized all the four cases of activists as enforced disappearances and is now asking Iran’s authorities to submit evidence to determine the details of their fates and whereabouts.

• Saeed Zeinali, born in 1976, was arrested five days after student protests that swept Iran in July 1999. He was a 22-year-old Tehran University computer science student at the time of his arrest at his home in Tehran on 10 July, 1999.

He has not been heard from since a brief phone call three months after his arrest. Yet Iranian officials are now denying that the then-22-year-old student was ever arrested or any knowledge of the case.

• Kurdish political prisoners Ramin Hossein Panahi, Loghman and Zaniar Moradi were executed on September 8, 2018. The executions were carried out after months of international condemnation of the death sentences issued for the young men.

The regime refused to hand over their bodies to their families for burial.

The international community and in particular the UN are obliged to take all necessary measures to end impunity in this case. Failure to hold Tehran accountable would simply embolden the Iranian authorities to continue their gross human rights violations.

We urge the international community, the UN Security Council, the UN Human Rights Council and its member states, as well as other relevant United Nation agencies, the European Union, all advocates of human rights and justice to end the immunity of those responsible for the 1988 massacre.
The time has come for referring the dossier of human rights violations in Iran, particularly the enforced disappearances and executions of the 1980s and the 1988 massacre of political prisoners, to the UN Security Council.

The time has come for Khamenei and his accomplices to face justice for their crimes against humanity.

The time has come for the United Nations to launch an international independent fact-finding mission to determine the fates of victims of enforced disappearances during the 1988 massacre in Iran.