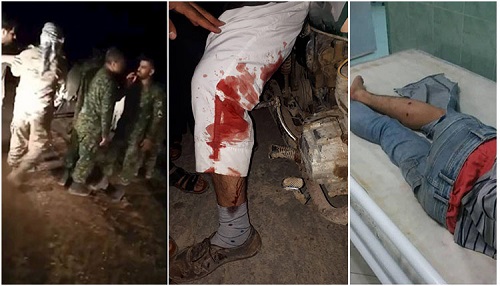 Reports indicate a number of civilians have been injured and one, by the name of Abud Rabie, is reportedly in dire conditions. Other reports indicate Rabie lost his life after being shot in the neck by the IRGC.

Public anger is mounting in Iran as regime officials have appeared on stages over the past few days to display glib reactions and give more of their empty promises about handling the disastre and preventing further damages from the flood.

Meanwhile, flood emergencies continue in Western Iran, with tens of thousands of people sheltering in the open with little food or warm clothes to endure the cold and wet weather.

Mohammad Pakpour, the head of the Revolutionary Guard Corps’ ground forces unveiled in a telephone report to the Chief of Staff of the Armed Forces, IRGC Brigadier General Bagheri, some of the disastrous dimensions of the devastating flood and inaction of the mullah’s regime in confronting this catastrophe.

He said, “They said for two or three days that the flood is coming, evacuate, without any foreground without, for example, giving them a tent, now they evacuate, where to go, go on a mountain which is cold, now water has taken everywhere, there is no road, only an open gas road … Many villages, most of the villages have no road, there’s nothing, only with just a helicopter, some food is taken there …. Electricity is cut off because all cables have fallen.”

He added: “There are too many problems, there is no management. No government official dares to go there, it is terrible. God is witness that they are very angry. I have just been able to get out of their way. They are very upset. They are very angry. Well, they have a very terrible situation” (Tasnim News Agency, 2 April, 2019)

Another video published on social media shows locals cursing a senior military IRGC officer who currently holds office as the secretary of the Expediency Discernment Council visiting flood stricken areas in the western town of Poldokhar, hit very hard by the floods.

“Get lost animal! Get lost you crooks! Take a selfie and put it on your mother’s grave, you dishonourable person!” the man angrily shouts.