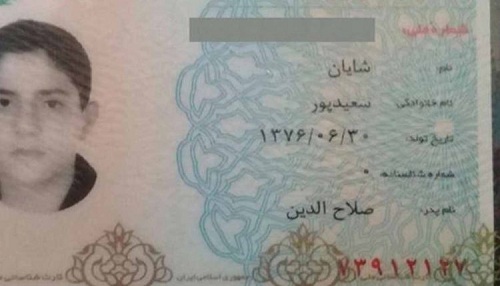 Shayan Saidpour, a juvenile offender was sentenced to death by the Branch One of the Criminal Court of Kurdistan Province, headed by judge Vafaian, on 23 October.

It is worth noting that Shayan was under the supervision of a psychiatrist before committing the crime.
Iran is a state party to the International Covenant on Civil and Political Rights (ICCPR) and the Convention on the Rights of the Child both of which expressly prohibit the use of the death penalty against anyone convicted of a crime committed when they were under 18.
Iranian authorities are still following horrific practice of sentencing juvenile offenders to death.
According to Amnesty International, there are at least 49 people on Iran’s death row who were under 18 at the time of the crime that they are alleged to. In addition, the UN says there are at least 160 such people facing execution in the country.

Although, it seems there should be many more young offenders on Iranian death rows, as use of capital punishment in Iran is often shrouded in secrecy.