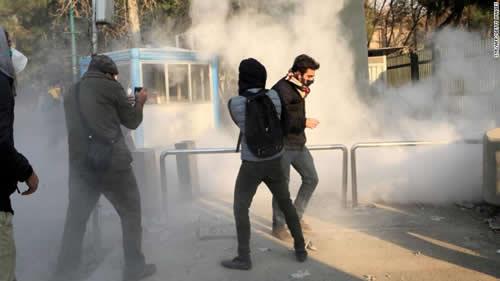 WASHINGTON, AFP, 4 January 2018 - The United States warned Iranian officials Thursday that protesters jailed or killed in a crackdown on anti-government demonstrations will “not be forgotten.”

“We condemn in the strongest possible terms the deaths to date and the arrests of at least one thousand Iranians,” State Department spokeswoman Heather Nauert said.

“We have ample authorities to hold accountable those who commit violence against protesters, contribute to censorship, or steal from the people of Iran,” she said.

“To the regime’s victims, we say: ‘You will not be forgotten’.”

Popular unrest flared in Iran last month and at least 21 people are known to have died in clashes between demonstrators and the Islamic republic’s security forces.

Washington, a long-standing foe of Tehran, has stood up for the protesters’ right to be heard, and Nauert has now gone further in endorsing what she said were their demands.

“We support these legitimate aspirations of the Iranian people, and call on the government to allow the free exchange of ideas and information,” she said.

“All of us should be able to enjoy the same basic economic and political freedoms, including the right to peaceful demonstration.”