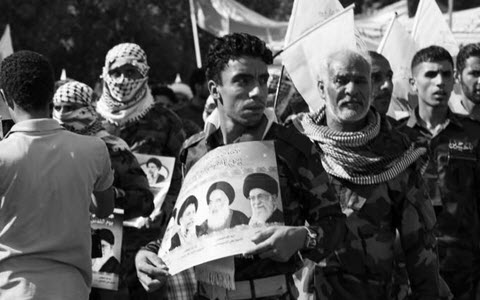 The Iranian Regime has redeployed fighters from the Syrian Civil War, like the Iraqi Popular Mobilization Forces (PMUs) and Afghan mercenaries, to quell the ongoing anti-regime protests that are happening across Iran.

Sources in Ahvaz, southern Iran, told Al Arabiya that the PMUs are joining Iran’s Revolutionary Guards Corps (IRGC) and suppressive security forces in the streets of Abadan and Khorramshahr and in Al-Thawra neighbourhood in Ahvaz.

Amad News, a website owned by the Iranian opposition, broadcast on one of its Telegram channels that the IRGC has also deployed thousands of Afghan mercenaries from the Liwa Fatemiyoun branch to the city of Khomeyni Shahr in Isfahan.

Ahvaz
In Ahvaz, there are calls to protest every night, when the suppressive security forces are deployed around banks and police stations, but relative calm during the day.

Although it is worth noting that the authorities are forcibly closing shops in the city’s central souq (market) at 3 pm and prevent anyone from entering it afterwards.

The sources even told Al Arabiya that the security forces were planting mines around military barricades that contain arms’ ammunition to kill any demonstrator that got too close.

On Wednesday, January 3, one person was arrested for handing out pamphlets calling on people to protest.

Counter-protests
The Iranian Regime has banned foreign media and even blocked off internet access in some places to prevent news from getting out, which means that many in the West are being treated to a very sanitised version of events with only the Regime’s word on death tolls and the level of protesters.

On Wednesday, the Regime even organised counter-protests (read: paid people to hold up pro-regime signs long enough to get the pictures out) with Hawza students, Basij and Revolutionary Guards members and public employees.

These people, who would probably lose their jobs or be kicked off their course or worse if they refused to participate, chanted slogans in favour of the Regime and against the protesters, who they referred to as “those inciting strife”.

Notoriously paranoid, anti-American Supreme Leader Ali Khamenei even accused “enemies” of the regime for inciting these protests. He meant to imply that the US had somehow convinced tens of thousands of people to rally against the Regime but through his ambiguity, he may have hit the nail on the head.

The enemies of the Regime did start these protests, because the Iranian people are opposed to the Regime.