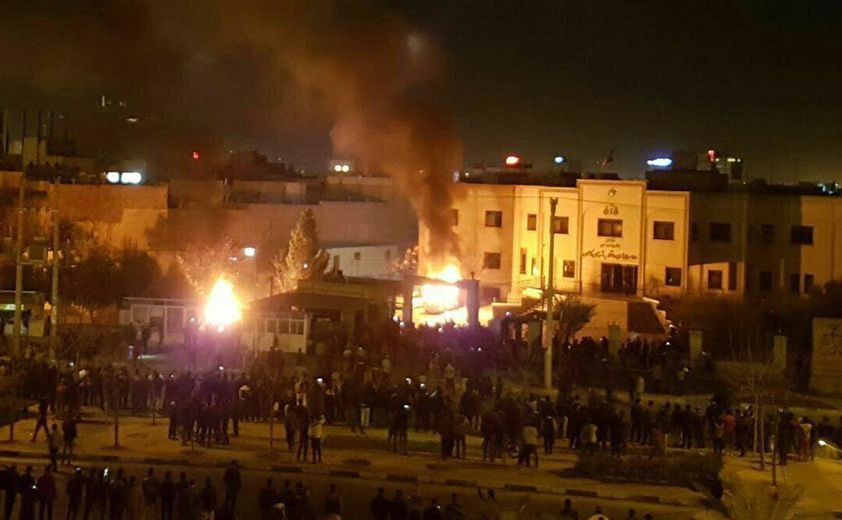 Following the Saturday morning demonstration of Tehran University students and protests by people and the youth in various parts of Tehran, Rouhani’s Interior Minister Abdolreza Rahmani Fazli called the gatherings unlawful and begged the people "not to participate in such unlawful gatherings because they cause trouble for themselves and other citizens.”

Also, the Provincial Council of Tehran held a meeting. Mohsen Hamedani, Deputy Governor of Tehran's Provincial Security Council, said about the protests of the people of Tehran: "On Enghelab Ave, between Enghelab Sq. and Vali-e Asr intersection, some unlawful gatherings were formed. However, in cooperation with the police we are going to control them.”

Tasnim news agency affiliated with the Quds Force said, “This gathering ... was held to criticize economic issues. Yet none of their slogans are related to economic issues. The slogans being chanted are mainly similar to the ones chanted during the 2009 sedition”. ISNA news agency reported, "Inside the University of Tehran, a number of students also chanted slogans against political factions and government officials. A number of demonstrators in the streets of the university began to burn garbage bins and throw rocks. The police are trying to control the situation, and disperse the demonstrators, who are mostly chanting slogans that are unrelated to economic problems, and are mainly in opposition to the pillars of the system."

This morning, December 30, students from the University of Tehran, while chanting “Reformists, Principalists, End of Story”, decided to join the demonstration in Enqelab square; but the Revolutionary Guards and other agents of the repressive forces prevented them from leaving the university.

The brave students were seen chanting, “College students are ready to die, yet will not succumb to infamy,” “Death to Dictator” and “Don’t be afraid, we are all together.” Security forces fired tear gas and a number of the protesters were severely beaten and injured.

In Tehran’s Vali Asr Street water cannon trucks dispatched to the scene were faced by massive crowds. Protesters in Enghelab (Revolution) Square were chanting, “Khamenei should know he will be overthrown soon,” “The people are poor, yet (Khamenei) lives as if he’s God,” “Seyyed Ali (Khamenei) shame on you, let go the country,” “You rich mullahs, give our money back,” “Cannons, tanks, Mullahs must get lost,” “Seyyed Ali, excuse us, but your time is up.”

Riot police units were seen attacking and arresting a number of protesters. People were seen also protesting in an area near Tehran’s Sa’adat Abad district.