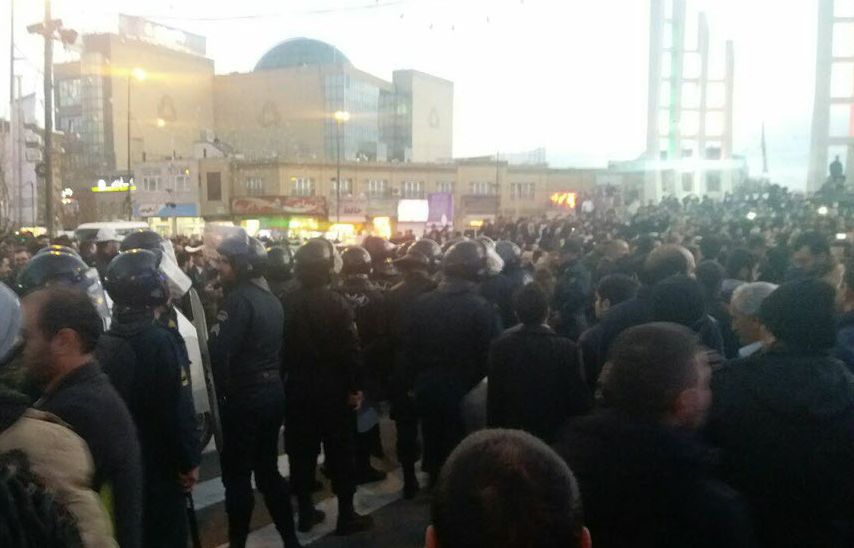 On the third day of the latest nationwide uprising in Iran, the clerical regime’s attempt to organize a counter-demonstration ended in a dismal embarrassment.

Fearing the reaction by angry protesters, the clerical regime went against its own norms and cancelled its march in Tehran and resorted to a mere gathering.

Despite large scale use of state resources for the counter measure, this state sponsored protests were met with unprecedented neglect and even many of the regime’s own supporters refused to attend.

The slogans aired at the regime’s counter-demonstration unveiled the mullahs’ utter fear of being overthrown.

State-run TV network broadcast on Saturday showed videos of the rally in which the chants included: “The Green Movement is following Rajavi’s path.”

On Friday, speaking at Friday Prayers sermons across the country, several senior clerics of the Iranian regime expressed their fear by reiterating threats the regime poses by the main opposition movement the People's Mojahedin Organization of Iran (PMOI/MEK).

In city of Mashahd, Friday Prayer Leader Alam al-Hoda, member of the regime’s Assembly of Experts and representative of Supreme Leader Ali Khamenei in that city, threatened the people not to rush to the streets in response to calls placed by the PMOI that are led by a woman, and they should not become tools of the enemy’s victory.

An hour after the failed counter-demonstration, students of Tehran University launched their own protest and chanted, “Reformist Hardliners Game is up” “Seyyed Ali (Khamenei), shame on you, let go of the state,” “Death to Dictator.”

Members of the Revolutionary Guards and Bassij, along with plainclothes agents, were seen fleeing in fear. No one was allowed to film the scenes and people’s mobile phones were confiscated.

Regime elements have closed Tehran University’s gates and preventing students from leaving campus. The students are chanting in response, “Khamenei, shame on you, let go of the government,” “State police, shame on you, shame on you,” “We don’t want a state of oppression, or police who act as agents.”

Anti-riot units riding motorcycles, armed with batons, attacked the college students to disperse the crowd, only to face stiff resistance by the students and forced to flee the scene.

Despite the dispatching of security forces, the brave people of Kermanshah continued to rush into the streets on Saturday chanting, “Not Gaza, Not Lebanon, My life for Iran.” Protesters used street signs and trash canisters to block streets near the so-called Beheshti Boulevard.

The demonstration in the city of Shahre-Kord began at the municipality intersection with protesters chanting “Death to Dictator.” Fully equipped security forces were seen attacking the people. Youth clashed with them and a number of protesters were arrested. State forces were seen dispatched to the streets in large units to create a climate a fear.