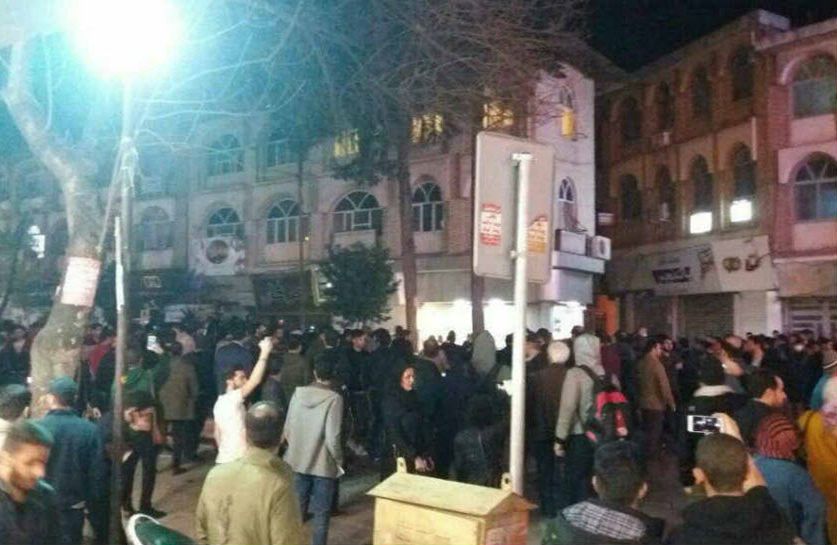 By the sunset, Basij mercenaries attacked protesters in an organized way and arrested the people or brutally beat them in many cities. On the other hand, people identified mercenaries and spies and introduced them to each other.

In Kianshahr in the city of Ahvaz, with the darkening of the sky, sound of bullets is heard. The people were chanting slogans of "Death to the dictator", “Death to High Prices”, "The people are panhandling while the Supreme Leader acts like the Lord", “Independence, Freedom, Iranian Republic”, “Beware of the day when we get armed”, and “Ahvaz dies but never accepts humiliation”. They crushed the lines of the police and continued their protests.

In Rasht, on Motahari avenue, Haji Abad intersection, which is an old area of Rasht, people are sitting on the street floor, and did not accept the police attempt to disperse them. Basijis repeatedly attacked people's gatherings and arrested people, but people removed the arrested people from the grip of Basij and IRGC and saved them. The repressive forces also used tear gas to attack the people. Brave women play a prominent role in protest movements. The brave people of Rasht chanted during the Friday night demonstrations: Death to Khamenei, we die, we die, we do not accept degradation, we die, we die, we take Iran back.

The brave youth of Rasht, in response to the Basij militants who chanted in favour of the terrorist and criminal Hezbollah, chant “Mercenary Basiji”. We do not want the mullahs’ rule. Death to the dictator...

In Sari, people protested against the kidnapping of a 25-year-old man by plainclothes mercenaries in a private car.

The mercenaries also severely beat an unemployed young man. People rushed to defend him and confronted the mercenaries. The people of Sari chanted the slogan of “Leave Syria, think about us!” in their demonstrations.

In Hamedan, the Revolutionary Guards, Basijis and Plainclothes brutally attacked people and injured a number of them who had gathered in the BooAli square and were chanting “Death to the principle of Velayat-e faqih, Khamenei is a murderer, his rule is void, not Gaza, not Lebanon, my life for Iran”. In response to these brutalities, the people broke the glasses of the Agricultural Bank and attacked other administrative buildings. They also chanted, “Death or freedom, Down with Rouhani, Leave Syria, think about us, the cleric sits idle at his desk, the young, have been tired and unemployed”.

Qom's people held their nightly demonstrations while the Revolutionary Guards and Basijis were travelling by their motorcycles in the streets of the city with a lot of speed and noise to create horror. But the brave young people of Qom, demonstrated with the slogans of death to Khamenei, Khamenei is a murderer, his rule is void, Seyyed Ali shame on you, leave the country, military join your people, brave Iranian support, support, We do not want British clergy, one less embezzlement, our problems are solved. The Revolutionary Guards and the Basijis attacked the demonstrators.

People of Sabzevar, with the slogan of we go to the gallows but don’t accept degradation, attacked government buildings and confronted the repressive forces. The Basijis were trying to create a fight by besieging the people who, with the unity and solidarity, managed to withstand the Basijis.

Passionate young people in Isfahan, in addition to the slogan "Death to Khamenei," mocked the bloodletting Supreme Leader, known among the people as Ali the beggar, chanting: "Seyed Ali, sorry, time to wake up!"

In Qazvin, the Basij’s attack on the people in Khayyam intersection resuled to confrontation. People chanted slogans "Not Gaza, not Lebanon, my life for Iran" and "Independence, Freedom, Iranian Republic", "Cry out, fellow citizen, get your rights". And they managed to get some young people out of the hands of the Basijis.

The people of Bojnourd continued the demonstration on Friday with the air darkness with slogans of “You use Islam, to suppress people”, “Brave Iranian, support, support!”, and confronted the agents.

The regime's mercenaries in Quchan attacked people in order to prevent night protests, people were drawn into conflict and the people managed to push them back
In Shiraz, people chanted slogans of the death to Khamenei and “tank, cannon, firework, the mullahs must be killed.”

In Zahedan, the people's protests features the slogan of Leave Syria, think about us! And in Ghaemshahr, Iranian dies but would not succum