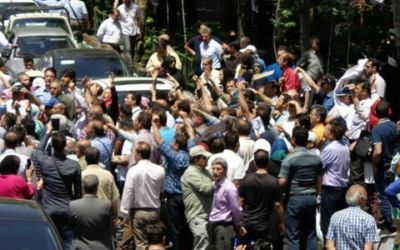 A member of Iranian regime’s parliament says that the Supreme National Security Council has issued a resolution calling on the regime’s Radio and TV organization (IRIB) not to broadcast the voices of protesters whose deposits are plundered by financial institutions affiliated to IRGC.

Ali Vafghchi in an interview with state-run ILNA news agency on Wednesday, November 1 stated that the IRIB in the past few days has not broadcasted two of his TV interviews with the depositors whose assets are plundered by IRGC affiliated financial institutions and when he pursued the issue he was told that “the Supreme national Security Council has issued a directive allowing the IRIB to stop broadcasting the voices of protesting depositors.”

He added: “About 10 percent of Iranians have been somehow involved with the problems of financial and credit institutions, and this is one of the country's super-challenges, and our question is whether these people deserve their voices be silenced even by the state radio and television,”

The protests by the plundered depositors have been going on for months in Tehran and other cities across the country.

During this period, the Iranian regime's security forces tried to suppress these gatherings and prevent them from happening.

On, October 23, more than two thousand people, whose assets were plundered by institutions affiliated to IRGC, judiciary and other state agencies and institutions, staged a rally in which women played a very active role in front of the regime's parliament. The repressive police force assaulted the demonstrators using batons and beat them brutally and tried to disperse the demonstrators, but was faced with the resistance of the people.

Protestors chanted: “Shame! Shame on the police force!”, “Cannon, machine gun, and tanks are no longer effective”, and “Death to the dictator." When the police arrested some people, especially women, and wanted to take them away by force, people chanted "You ISIS, you ISIS, death to ISIS, let them go," "Police, shame on you, let our fellow citizens go."

Some of the slogans were: "Death to Saif (head of the Central Bank)", "Shame on Rouhani", "Larijani is apparently the judge but a thief's accomplice," "Theft is institutionalized, the hearts are full of hatred," "For traveling to other countries, they have taken our money "," They had a budget deficit, but they have taken it from our money", "Caspian institute has stolen, the government has supported it", " Saif betrays, parliament confirms", " I will not give up unless I get my rights"," Injustice is enough", ...

Nearly two thousand people in South-western city of Ahvaz, plundered by financial institutions affiliated with the Revolutionary Guards (IRGC) and other oppressive institutions, including the Arman Vahdat Cooperative, continued their protests during past weeks, on Wednesday night of October 18. They chanted to the criminal leaders of the regime: "Let Syria go, care about us", "If you reduce your embezzlements a bit, our problems will be solved", "Death to Saif (head of the regime’s Central Bank) ", "Khuzestanis die, but never accept ignominy", and “I fight, I die, I shall take back my money”.

Meanwhile, the people looted by the Afzal Tous government institution staged another protest rally in front of the UN office in Tehran on Wednesday, October 18. A number of other plundered people gathered in Mashhad, but were brutally attacked and detained by the repressive force. The protests continued on Thursday in Tehran.

In her message on October 16, Mrs. Maryam Rajavi called on all the people, especially the brave youth, in various cities of the country, to express solidarity and support for the plundered people. She added, "The wealth of the Iranian people is entirely in the service of consolidating the domination of religious fascism and the warfare and the export of terrorism, and is looted by the leaders of this regime. She said that Iran's economy is mainly in the hands of the Revolutionary Guards; therefore, economic relations with this regime have no legitimacy and are totally against the people and national interests of Iran and must be stopped.