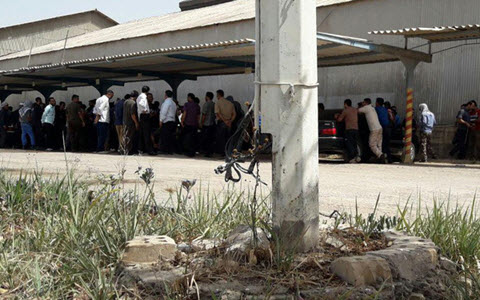 On Sunday morning 18 June 2017, about 700 Active and retired workers of industry sector of "Haftapeh sugarcane corporation complex” gathered in front of the administrative building of the unit in 50 degrees Celsius heat, demanding their wages and their retirement benefits.

Around 300 retired employees of this unit, who were retired since March 2016, have been unable to collect their pension claims.

These workers have demanded payments of their 4% retiree share of unusual works and work hardship to social security administration, also, corporation owe them productivity benefits of 2015 and 2016. At the same time some of the active and day workers of industry section were present at this gathering. They were saying: They were demonstrating for two months unpaid wages of 2015 and two months wages of present year along with unpaid bones and productivity benefits of 2015 and 2016.

According to these workers, they are demonstrating in a condition that temperature in Haftapeh has risen to above 50 degrees Celsius; however, neither corporation, nor state authorities do understand their working condition problems to come up with any solutions.

Also, apart from the demands of unpaid wage, retirement premiums of active employed workers hasn’t been paid to social security in the past four months, and their health insurance books have already lost their validity.

Haftapeh Sugar Cane Plantation and Corporation is located in western Iran, near the ancient city of Susa in Khuzistan province. This corporation officially started its operation in 1962, and it was officially registered as corporation in 1974, and had obtained license for agricultural activities and all products related with sugar cane.