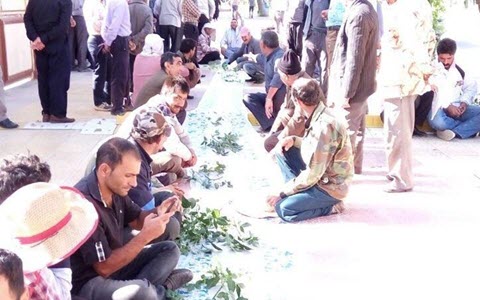 Delfan's municipal workers gathered to protest their outstanding unpaid wages up to 10 months, with demonstrating their empty food tables in the city in front of the regime’s governor building on Saturday morning June 17, 2017.

One of Delfan’s municipal workers pointed to their unpaid wages for eight months, and said: "In addition to their salaries and end of year bonuses, which still they have not received, their insurance premium hasn’t been paid about one-year too. He said every worker, who protests this situation, the mayor will declare that he is not needed, and he gets fired”.

Another worker in this protest gathering said: “I am unable to pay for my daily necessities, as such my gas line is blocked and our life quality has deteriorated. We are fasting and we are unable to perform any cooking or heating”.

No one wants to lend us any more, our bread basket is empty. I sold my motorcycle to pay for my living necessities, and now, I do have no money to meet the basic needs of my family”. He added.

Another deprived workers said: “I have borrowed from local merchants for my everyday living, but now, I cannot borrow food from shopkeepers anymore, my payments due has increased to (two million), and no one else is willing to lend to anyone”.

Delfan is a city in Lorestan province, Western Iran.