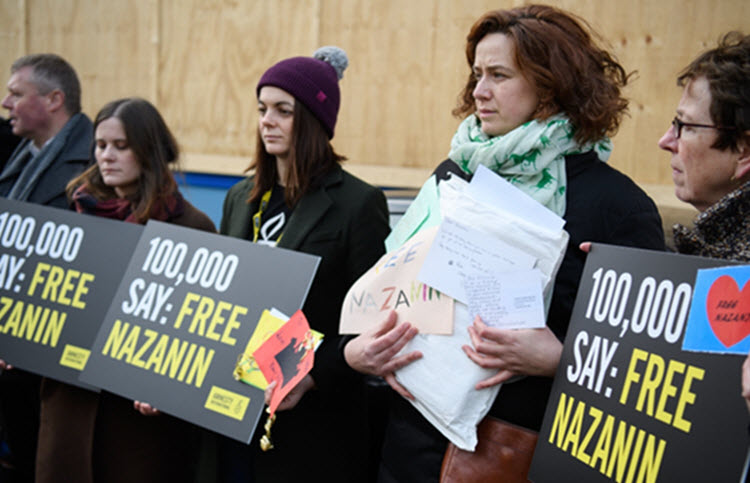 London - The husband of the British-Iranian charity worker held on bogus spying charges in Iran has written to the Iranian embassy in London to try to arrange a meeting with a visiting Iranian official.

Richard Ratcliffe, who has not seen his wife Nazanin Zaghari-Ratcliffe and their baby daughter, Gabriella, since the pair visited family in Iran in 2016, wants to meet with Abbas Araghchi, the deputy for legal and international affairs in Iran's foreign ministry, in order to bring his family home.

Ratcliffe said: "If we manage to get this meeting, I will obviously be much more hopeful. If we don't get the meeting, I will be keen to know what happened when [Araghchi] met with the British officials. I haven't given up hope, but so far there is no evidence that the meeting is going to happen."

False Charges and Ransom Demands
Zaghari-Ratcliffe, who worked with the Thompson Reuters Foundation, is currently serving five years for the false charges of plotting to overthrow the Iranian government.

She has always denied these charges and many believe that this is just another example of Iran taking a dual-national hostage to extract a ransom from the other nation.

The idea is that Iran will charge the dual-national with a vague national security charge and then ask the other country for more trade deals, better political relations, or even an outright cash payment.

In late 2017, Iran demanded £400 million, a British bank account for their embassy, and increased trade between Europe and Iran in order to release Zaghari-Ratcliffe.

It is unknown just how many dual nationals are being held on bogus national security charges in Iran, but current estimates are between 12 and 30 people, including a former UNICEF worker from the US, a Princeton doctoral student, and a Swedish disaster medicine expert.

Protest
On Wednesday, February, 21, human rights activists and ordinary people sympathetic to Zaghari-Ratcliffe’s plight held a protest outside the Iranian embassy in solidarity with the Ratcliffe family.

Ratcliffe said: "I was very touched and pleased that they have come. Knowing that she is cared for and we are cared for is very important. I think it is important for [Nazanin] to know that she is not alone."

Zaghari-Ratcliffe spent eight-and-a-half months in solitary confinement and her physical and mental health is suffering greatly because of this imprisonment.

She was promised a temporary release in order to spend time with her daughter, but Iran changed the plans at the last minute.