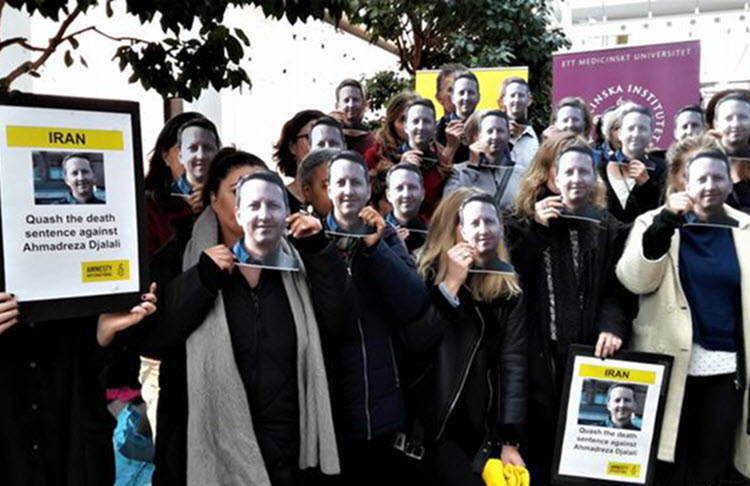 London, 01 Mar - Sweden recently granted citizenship to a disaster medicine expert currently on death row in Iran, with the hopes that it will allow the Swedish Foreign Ministry to intervene in the case and get the doctor released.

Dr. Ahmadreza Djalali, who taught at the Karolinska Institute of Medicine in Stockholm and worked in the research department of the Free University Brussels (VUB), visited Iran for a medical conference in 2016, where he was arrested and charged with spying for Israel. In October 2017, he was tried and sentenced to death.

Djalali’s wife Vida Mehrannia explained that decision to grant him Swedish citizenship gives her hope that he will be released.

She said: "I was so happy, because I got some hope that the Swedish government can [do] more to help my husband and he will get more support from Sweden."

Ami Hedenborg of Amnesty International's Sweden branch also noted that this should make a difference in the case, because the Swedish Foreign Affairs ministry now has a formal right to met with Djalali, something his right of residence in Sweden, did not permit.

After Djalali was first arrested, Mehrannia kept this secret, hoping that the Iranian Regime would realise her husband once they discovered that he was not a spy. After his sentencing she vowed to get international attention around the case and began contacting his former colleagues and the media, to get Djalali back to their family in Sweden, explaining how hard it was to tell their children, aged 6 and 15, what had happened to their father?

This resulted in several international appeals from Amnesty International, 75 Nobel laureates, the Swedish Academy of Sciences, the Karolinska Institute, and the VUB.
Djalali’s former colleagues, including Lisa Kurland, a senior research fellow at the Karolinska Institute, and VUB President Caroline Pauwels, have described him as a wonderful person and an impressive scientist, while calling into question the legitimacy of his trial, which occurred behind closed doors.

Too late
However, it might be that Djalali’s Swedish citizenship has come too late to save his life.

Yasamin Alttahir, a Mideast expert with Amnesty International in London, explains that there is little chance of Sweden intervening at this late stage, given that Iran refuses all legal action against the death penalty, even efforts to review proceedings that are legally unsound.

Alttahir said that whilst Djalali will only be able to access "very limited" consular assistance, amnesty could be granted to him during the upcoming Iranian New Year.
There are roughly 30 dual nationals currently stuck in Iranian prisons on trumped-up charges, most of whom have been arrested in the past two years.

It was the latest in a number of suspicious deaths in custody in the past two months.