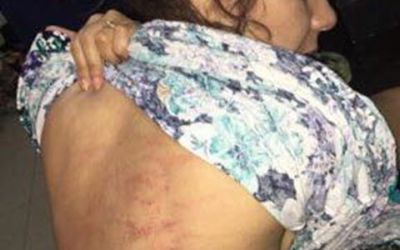 The inhumane sentence of 80 lashes for an asylum seeker who was deported back to Iran by the government of Norway in March was implemented in Tehran.

According to reports, the afternoon of September 19, sentence of 80 lashes for Leila Bayat was carried out at Branch 3 of Guidance Prosecutor’s Office in Tehran. Earlier, she was sentenced along with three of her friends to 80 lashes on the charges of drinking alcoholic beverages.

Leila Bayat and her friends, who were released on bail, tried to change the sentence for two and a half years, and after disappointment, Leila and his 5 year old son immigrated to Norway, where they applied for refugee status, but his asylum case was repeatedly rejected by the Norwegian immigration authorities.

Finally on 11 March 2016 Bayat was separated from her son, who is now 13, and returned to Iran, and from that date she was trying to stop the lashing order again, but her efforts did not go anywhere and ultimately this inhumane sentence was enforced.

“I just told Norwegian authorities about my case, but they voted against my case seven times, and did not accept the documents I provided," she said regarding her refugee case.

“They said that the court order, the arrest warrant, the evidence of the attorney and everything I provided from Iran was fabricated and my case is a lie.”
“They said our expert at the Norwegian Embassy in Iran examined my evidence and said that such a sentence is not enforced in Iran. Eventually they separated me from my 13-year-old son and deported me to Iran.”