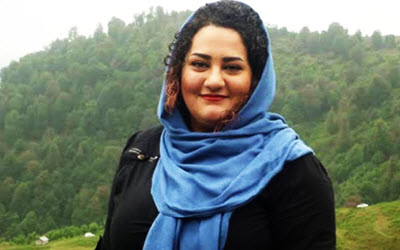 The human rights activist Atena Daemi, on hunger strike since 7th April in Evin Prison, is suffering from numerous health problems and is in critical condition. Atena’s mother, who visited her on Sunday April 23, maintained that “the regime’s Revolutionary Guards, judiciary, and Prosecutor-General are responsible for Atena’s life.”

“Today, Sunday April 23, I went to visit Atena”, said Masoumeh Nemati, Atena’s mother, about her meeting with Atena, “She was not feeling good at all. She has lost about 10 kg, and is suffering from kidney problems, nausea, and dizziness. The doctor at prison infirmary said that her blood might be infected. Her tongue has turned yellow and her nails are blue.”

Atenal Damei started the hunger strike to protest against unlawful conviction of her two sisters, Ensieh and Hanieh, accusing the Iranian regime of taking the political prisoners’ families hostage.

Atena Daemi was sentenced to seven years in jail on unsubstantial charges of ‘assembly, collusion and propaganda against the regime’.

The real reason for Atena’s conviction are her postings on Facebook and her paintings that criticise the death penalty. She has been visiting gravesites of the people who were killed during the 2009 protests following the sham presidential elections and reporting on the situation of political prisoners.