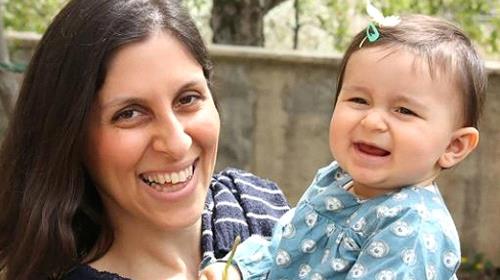 Iranian Revolutionary Guard officials have pressured British-Iranian charity worker Nazanin Zaghari Ratcliffe, a prisoner of conscience, to choose between moving her two year-old daughter into prison with her for up to three days a week or sign a document to say that she does not want the “right to be with her young daughter”.

Prisoner of conscience Nazanin Zaghari Ratcliffe, a British-Iranian charity worker held in Tehran’s Evin Prison, told her husband on 25 November that Revolutionary Guard officials had pressured her to choose between moving her two-year-old daughter, Gabriella Ratcliffe, into Section 2A of Evin Prison with her for up to three days a week or sign a document to say that she does not want “the right to be with her young daughter”. There are no suitable facilities for children inside Evin Prison. In her last phone call with her husband on 2 December, Nazanin Zaghari Ratcliffe said that neither choice is acceptable to her and what she requests from the authorities instead is more regular visits – either a day-long visit or two half-day visits each week – with her daughter. She is currently allowed to have only one hour-long visit per week. The authorities seem to have imposed this choice in a misguided attempt to counter the negative publicity caused by the fact that she has been separated from her child. She has suffered a serious decline in her physical and mental health, and wrote a suicide letter to her husband in October.

Nazanin Zaghari Ratcliffe was sentenced to five years’ imprisonment in September following an unfair trial before a Revolutionary Court in Tehran, which convicted her on trumped-up national security charges. The precise charges remain unknown to the family. Articles available on state-run news outlets indicate that her conviction solely stems from her professional work with media foundations and charities based in the UK. At the time of her arrest, which happened in April when she was on holiday in Iran, she was employed as a project manager for the Thomson Reuters Foundation (TRF), managing journalism and media training projects in countries including Lebanon, Jordan, Morocco and Myanmar and preparing fundraising applications. State-run news outlets have claimed that she was a “spy” for TRF and that TRF pursues the interests of Western states by promoting “Western-style” democracy in developing countries and facilitating, in turn, “the erosion of local cultures and traditions”. Amnesty International understands that TRF has no projects on Iran. In June, the head of the justice department of Kerman Province stated that Nazanin Zaghari Ratcliffe had “conducted actions against the security of the country during the 2009 sedition [referring to the post-presidential election protests] through designing various websites and carrying out media campaigns”. These accusations are solely based on the work that she did seven years ago in London as an administrative assistant at BBC Media Action for a project that trained youth journalists in Afghanistan and Iran.

Please write immediately in Persian, English, Arabic, French, Spanish or your own language:

 Calling on the Iranian authorities to release Nazanin Zaghari Ratcliffe immediately and unconditionally, as she is a prisoner of conscience held solely for peacefully exercising her right to freedom of expression and association;

 Calling on them, pending her release, to allow for visits with her young daughter involving extended contact and in a suitable environment, taking account of the best interests of the child in line with the provisions of the Convention on the Rights of the Child, which Iran has ratified;

 Requesting the authorities to grant British consular access to her while she is detained.

And copies to: President Hassan Rouhani. Please send your appeals to the care of Iranian embassy in your country, listed below. If there is no Iranian embassy in your country, please mail the letter to the Permanent Mission of the Islamic Republic of Iran to the United Nations, 622 Third Avenue, 34th Floor, New York, NY 10017, United States. Please insert local diplomatic addresses below: Name Address 1 Address 2 Address 3 Fax Fax number Email Email address Salutation Salutation Please check with your section office if sending appeals after the above date. This is the second update of UA 117/16. Further information: https://www.amnesty.org/en/documents/MDE13/5163/2016/en/

In October, Nazanin Zaghari Ratcliffe contemplated suicide after she was sentenced the previous month to five years’ imprisonment. Richard Ratcliffe told Amnesty International that her spirits sank so low that she wrote him a suicide letter. She also went on hunger strike on 13 November to express her despair over the prospect of never being released. She became so unwell that the authorities arranged an emergency family visit for her on 18 November. During the visit, her mother collapsed when she saw how thin her daughter had become. She ended her hunger strike the same day for the sake of her daughter. In prison, she has been suffering from heart palpitations, blurred vision, and pain in her hands, arms and shoulders.

Nazanin Zaghari Ratcliffe had been about to leave Iran with her then 22-month-old daughter to return to the UK when she was arrested on 3 April. Before being taken into custody, she was allowed to leave her daughter in the care of her parents, who had accompanied her to the airport. The authorities confiscated her daughter’s British passport. Her family returned to the airport twice after her arrest to inquire about her fate and whereabouts but the authorities refused to provide them with any information, including the reason for her arrest and detention. The authorities initially held her in an unknown location in Tehran for about a week before transferring her to an unknown detention facility in the city of Kerman, nearly 1,000km away from Tehran in the south of Iran. She was only permitted to make a brief telephone call to her family for the first time three or four days after her arrest but was not allowed to give any details during the phone call. On 11 April, her family received a telephone call from an official who only identified himself as the director of a detention centre in Kerman and who said she was “fine”. On 27 April, her family received another call, apparently from a Revolutionary Guard official who told them that she was being held for “reasons related to national security” and that she would likely be held for another two or three months until their investigation was complete. Her family was asked to prepare some clothes and money for her. For some time after her arrest, she was allowed intermittent telephone contact with her family in Iran but not with her husband; she is now permitted telephone calls with him.

Nazanin Zaghari Ratcliffe was only allowed to see her family, including her daughter, for the first time on 11 May, when she was taken to a hotel room in Kerman and permitted a closely supervised visit with her family. She was not allowed to discuss the details of her case. According to her family, she was visibly unwell: she had lost weight and was so weak that she could not stand up from her chair and was unable to lift her daughter. She was not allowed access to a lawyer, despite being repeatedly interrogated and told to sign a statement. On 18 May, she was taken to the women’s section in Kerman Prison and around a month later, in mid-June, she was transferred to Evin Prison, where she is being held in isolation in Section 2A, under the control of the Revolutionary Guards. The Iranian authorities have not allowed visits from British consular officials.

In August, the United Nations Working Group on Arbitrary Detention said that her detention was arbitrary and called on the Iranian authorities to immediately release her and accord her an enforceable right to compensation.

According to the UN Rules for the Treatment of Women Prisoners and Non-custodial Measures for Women Offenders (the Bangkok Rules), “[n]on-custodial sentences for women with dependent children shall be preferred where possible and appropriate, with custodial sentences being considered only when the offence is serious or violent or the woman represents a continuing danger, and after taking into account the best interests of the child” (Rule 64). The same Rules state: “Visits involving children shall take place in an environment that is conducive to a positive visiting experience… and shall allow open contact between mother and child. Visits involving extended contact with children should be encouraged, where possible” (Rule 28).