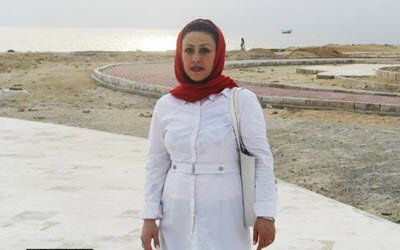 “The people’s vote has no credibility in the Islamic regime and holding sham elections is only aimed at legitimizing the regime. Whoever comes to power enjoys Khamenei’s approval and is not elected by the people”, she wrote.

Below is translation of part of her letter:

I have been in the mullahs’ prisons for eight years and each day I have witnessed how imprisoned women are tortured. Seeing such scenes I say with all my might that this fundamentalist regime cannot be reformed.

The people’s vote has no credibility in the Islamic regime and holding sham elections is only aimed at legitimizing the regime. Whoever comes to power enjoys Khamenei’s approval and is not elected by the people.

It is significant that this presidential election has turned into a revelation of corruption and plundering, in which both factions’ political failures are seen very clearly. This is a resemblance of the regime’s pillars falling while senior officials claimed time and again how their entire system is based on such a foundation.

According to official statistics, during the past four years Rouhani’s government has registered the highest number of executions. Senior officials have, one after another, unveiled the secrets of the 1980s and are actually proud of what they did to the people!

Pour-Mohammadi, the current Justice Minister, was a member of the Death Commission back in 1988. This current government sent 25 Kurdish youth to the gallows.

In 1999 Rouhani was this regime’s Secretary of the Supreme National Security Council and played a leading role in the crackdown on students uprising. The spread of corruption and prostitution is part of the nature of this regime, due to the lack of proper management.

As we have witnessed Rouhani’s ‘magic key’ failed to open any locks. In fact, larger locks have been created.

And now, prior to the sham election, Rouhani is resorting to ridiculous measures such as hiking and taking pictures alongside young girls to gain people’s votes, whereas he is one of the main officials imposing mandatory hijab regulations. This is the exact meaning of using the people’s vote as a tool, let alone the country’s economy and politics.

Ebrahim Raisi himself was a member of the 1988 Death Commission. He lacks even one day of administrative experience. Of course, he has vast experience from the 1988 executions and now he describes it as “God’s will”!

Today the regime’s crackdown apparatus continues to shed the youths’ blood in the name of Islam!

This regime resorts to any and all crimes necessary to maintain its rule, and they even endanger the security of other nations, such as Syria, Iraq, and Yemen and elsewhere, to reach its own objectives.

This entire regime will never be reformed and they are completely illegitimate for the Iranian people!